There's no doubt about it -- the liquidity rally is alive and well. The S&P 500 (SNPINDEX:^GSPC) added another 0.3% today, making a new record (nominal) high, and extending its winning streak to seven days. The index also capped its best week since January. It has now risen 17.8% year to date (once you factor in dividends, the total return is 19.2%). If the index were to tread water for the next five-and-half months, that would remain a very respectable annual gain.

With stock indexes setting new highs right and left, it's not surprising that the CBOE Volatility Index (VIX) (VOLATILITYINDICES:^VIX), Wall Street's "fear index," fell another 1.2% to close at 13.84, its lowest closing level since May 22 -- the day on which the market first got wind that the Fed was considering slowing its bond purchases this year. (The VIX is calculated from S&P 500 option prices and reflects investor expectations for stock market volatility over the coming 30 days.)

Boeing's latest incident could be a genuine crisis
It's been a rough seven days for Dow component Boeing (NYSE:BA). Last Saturday, a crash at San Francisco International Airport became the first fatal crash of the company's 777 long-haul jet. However, while that accident looks like a case of pilot error, the flagship 787 "Dreamliner," operated by Ethiopian Airlines, which caught fire at London's Heathrow Airport, was parked at the time.

The 787 is the same model that was grounded by regulators worldwide in January after a series of incidents that originated with the sophisticated aircraft's lithium-unit battery unit.

Back in mid-March, when the Federal Aviation Administration approved Boeing's proposed "fix" to its batteries, I wrote:

"Nevertheless, something still doesn't sit right with me... Where is the fix? These measures address the effects of the problem, not its cause. Indeed, the latter is, at this stage, impossible to resolve. On Monday, The Wall Street Journal reported that the National Transportation Safety Board has so far been unable to determine the root cause of the lithium-ion battery fire on a parked 787 at Boston's Logan Airport."

I want to be absolutely clear that we don't yet know whether today's fire is linked to the battery unit. In fact, Reuters is reporting that the visible damage to the Ethiopian Airlines aircraft appears to be higher up and further back than the location of the 787's battery compartments.

Boeing shareholders were exceptionally even-keeled throughout the Dreamliner "crisis" this year. In fact, Boeing is the third-best performer in the Dow, year-to date: 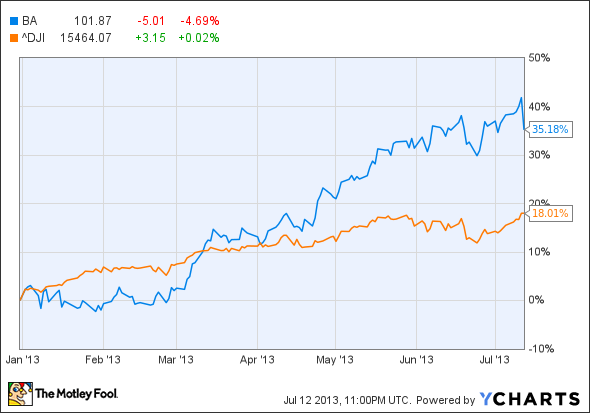 However, today's 4.7% decline -- the shares were down 7.4% at one point during the day -- shows that investors are genuinely concerned about this latest problem. Rightly so, in my opinion. If today's fire does turn out to be connected the battery unit, the uplifting air Boeing investors have ridden this year could quickly turn turbulent.