PriceSmart (NASDAQ:PSMT), a company widely referred to as the "Costco of Latin America" -- which is appropriate given it's a Costco spin-off -- reported earnings this week that missed estimates and sent shares down.

However, as I'll explain below, investors haven't got too much to worry about. The wholesale chain continues to execute its strategy, and bring its business model to Latin America. We'll first tackle the specifics of the report, then take a step back to look at the bigger picture.

During the second quarter of the year, PriceSmart saw revenue increase 13%, and earnings per share jump 17%. This continues a positive trend for the company of steady increases. 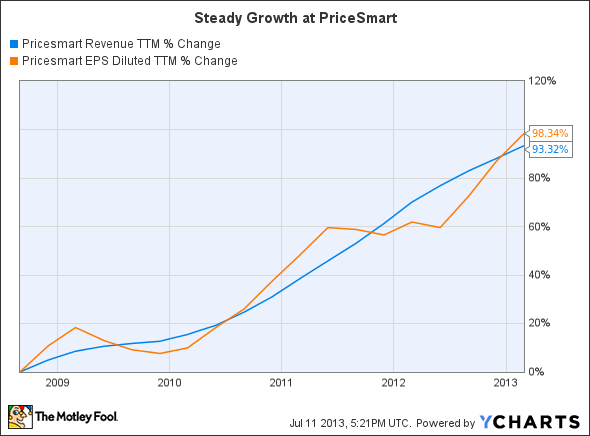 Though those numbers are encouraging, earnings of $0.61 per share missed analyst estimates of $0.63, and revenue of about $572 million came up short of estimates by $1 million.

The important stuff
But there are even more important numbers that investors must consider when digging into the report. Sales at comparable stores were up 9.2%. This is a very healthy clip: It shows that PriceSmart's club membership model is gaining acceptance in local communities, and that growth in revenue has more to do with increased sales than simply opening up more stores.

The one warning sign was that the renewal rate fell to 84%, from 89% one year ago -- but the 2012 number was also higher than average due to the fact that PriceSmart instituted its membership price increase in June of 2012, and many hurried to renew before the deadline.

What this all means
I've been invested in PriceSmart since finding their stores while living in Costa Rica three years ago. There's no doubt that the company's stock is a little pricey -- trading at about 33 times earnings. At the same time, however, the company has continued to take a slow and steady approach to introducing itself to more and more Latin American countries.

Over the next year, new stores will be opened in Honduras and Costa Rica. That will bring the company's store count to only 33 worldwide. Some investors may have been disappointed that no new announcements were made for store openings in South America -- as many see that as a big avenue for future growth.

The undeniable fact remains that PriceSmart's club/membership model is more than a passing fad in these countries. While the stock isn't a screaming deal now, it represents a way to gain exposure to emerging economies through a smart, methodical company.