Solar stocks have been on a tear this year, and the biggest names in the industry are crushing the market, which is a welcome sight for investors. 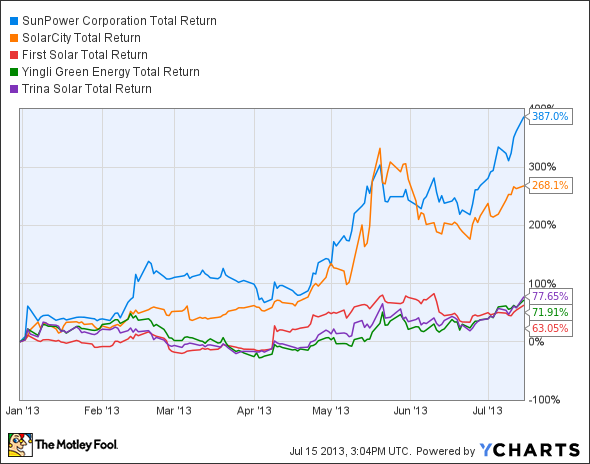 This week, the industry heard that China will boost its installations, and that drove stocks higher again. But there's other news from China that may have a bigger impact on the industry.

China 35 GW announcement
On Monday, solar stocks jumped when China's State Council said it was planning to support 35 GW of solar installations by 2015. That puts installations at over 10 GW for each of the next three years, more than any country has ever installed in a single year.

LDK Solar and Yingli Green Energy (NYSE: YGE) were two leveraged solar plays that jumped on the news, hoping that the demand will help them utilize capacity that's sitting idle right now. The thing is that this wasn't news at all, and I think stocks overreacted wildly to what we've known for months. I've covered reports since December suggesting 40 GW of solar in China by 2015, so we've known for some time that China will boost demand to support its manufacturing industry. The question is whether this increase in demand will be enough to pull Chinese manufacturers to a profit.

Three companies that should benefit from making both panels and systems are Trina Solar (NYSE: TSL), JinkoSolar (NYSE:JKS), and Canadian Solar (NASDAQ:CSIQ). Trina is already building a 50 MW project in China, Jinko was approved for $1 billion in loans from the China Development Bank, and Canadian Solar will take what it's learned in North America to developments in China. The good news for these companies is that systems have come with higher margins than making modules, so investors should watch if that trend continues in China.

The irony of this move is that it's bad for Chinese manufacturers. Eighty percent of the polysilicon used in China comes from the U.S., Europe, or South Korea, and this will only increase the cost for the raw material for solar panels. Yingli Green Energy has already said this will increase costs for manufacturers, so this could eat up some of China's cost advantage. We'll also have to see if this helps or hurts negotiations between China and Europe over tariffs, which would be awful for manufacturers that count on Europe for a large percentage of demand.