Shares of Chipotle Mexican Grill (NYSE:CMG) surged to a new 52-week high above $400 on Friday following a strong Q2 earnings report. Chipotle stock peaked around $440 last year, before losing nearly half of its value because of concerns that growth was petering out. 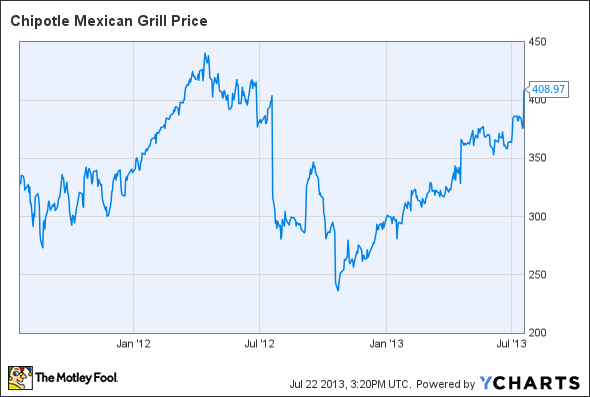 One big blow on the way down was the short thesis outlined by David Einhorn at the 2012 Value Investing Congress. Einhorn argued that Yum! Brands (NYSE:YUM) would steal market share from Chipotle with its new Cantina Bell concept that offers higher-quality food than the typical Taco Bell menu but undercuts Chipotle on price.

Einhorn's argument has not found much support in Chipotle's recent performance. Chipotle restaurants are as busy as ever, and the company is still growing strongly. That said, I believe most of the profit has already been made for Chipotle investors. Chipotle stock now trades for more than 30 times forward earnings, and further multiple expansion is unlikely unless Chipotle shows investors that it can significantly increase its profit margin.

A large part of the difference was a calendar shift that resulted in two fewer days in the first quarter and an extra day in the second quarter. That said, according to CFO Jack Hartung, the underlying trend still improved by 150 basis points from Q1 to Q2 after adjusting for the calendar shifts.This performance led Chipotle's management team to increase the company's 2013 sales guidance. As a result, investors drove Chipotle stock up by more than 8% on Friday.

Can margins keep growing?
Chipotle has grown revenue and earnings at an impressive rate since the Great Recession. Earnings growth has been boosted by significant margin expansion over the past five years. Chipotle's strong comp sales growth allowed it to better leverage its fixed costs. This margin expansion can be seen from the fact that earnings growth has significantly outpaced revenue growth for the past five years. 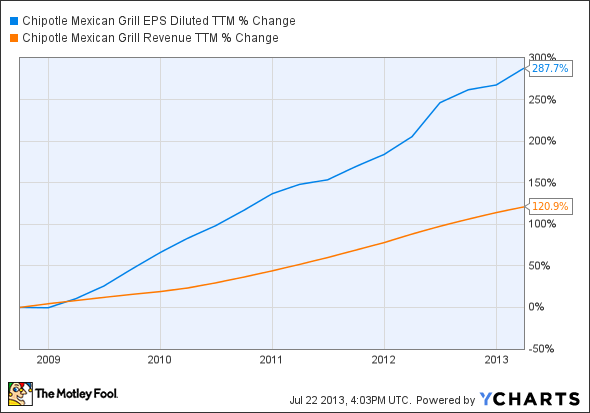 However, for the first half of 2013, Chipotle's pre-tax margin dropped from 17.8% to 17.3%. This was the result of more modest comp growth, which created less operating leverage, and rising food costs that weren't offset through menu price increases.

Chipotle announced on last Thursday's earnings call that it doesn't intend to raise prices at all this year. The company is in the midst of a campaign to remove genetically modified organisms from its food. That's driving some of the cost increases, since it's difficult to find suppliers of non-GMO ingredients. However, management wants to wait until Chipotle is 100% GMO-free before raising prices.

When these menu price increases occur (probably in 2014), they should offset the cost increases. However, it's not clear that Chipotle can raise prices enough to drive significant margin expansion, as opposed to simply recovering the increased costs. Without this margin expansion, Chipotle is unlikely to grow earnings fast enough to justify a higher stock price than the current $400 range. As a result, Chipotle stock doesn't seem like a good investment opportunity at this time.

However, as my colleague Dan Caplinger astutely pointed out last week, sometimes a great company doesn't have a great stock. Chipotle's stock price already incorporates all of the upside that can be reasonably expected from the company's performance. Investors who missed out on the recent run shouldn't risk compounding their frustration by buying Chipotle stock today when it already trades at a high valuation.