It looks like Cisco Systems (NASDAQ:CSCO) is getting back into the growth-by-acquisition game again.

The networking giant famously promised to slim down in 2011. Cisco had become too bulky, too complicated, and too inefficient after swallowing scores of consumer-oriented companies, and a serious diet was in order. The company has killed off or sold most of its consumer-grade product lines, including the Linksys network router division and the Flip video camera business.

The company never really stopped making small tuck-in acquisitions, but the deals moved over to the enterprise-focused side of things. Two billion-dollar buyouts made waves in 2012, but not always in a good way.

Today, Cisco got back to basics with a buyout that's squarely in the company's wheelhouse. This time Cisco is spending $2.7 billionthe target was network security specialist Sourcefire (NASDAQ:FIRE.DL). The offer is about 28% higher than last night's closing price for Sourcefire shares, and the company is going out at an all-time high. Including the buyout premium, Sourcefire investors have enjoyed a 65% return over the last year.

That's an impressive gain for a small-cap niche specialist -- but do you know who's almost keeping pace with Sourcefire's climb?

That's right: Cisco itself has soared 60% in 52 weeks, utterly crushing its peers on the Dow Jones Industrial Average (DJINDICES:^DJI), although it dipped on the Sourcefire news and still remains slightly below the Dow's average gain today. 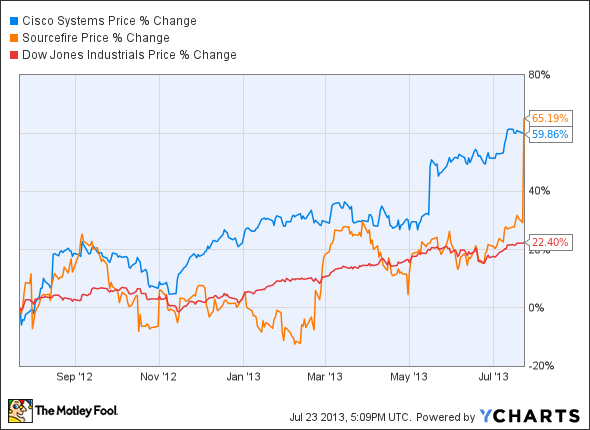 So what does this deal mean for investors in the networking sector? Well, not much unless you're betting on Sourcefire or Cisco.

Nobody seems to expect another round of consolidation in the space. Fortinet (NASDAQ:FTNT) has gained 4.8% today, but other data security experts have stayed flat or traded down. Fortinet always looked like a reasonable takeout target, particularly since the company parted ways with longtime CFO Ken Goldman last year. The Sourcefire deal paints a slightly larger target on Fortinet's back, but you have to wonder who would be able to pay a buyout premium on top of Fortinet's $3.5 billion market cap. Most of the big boys have already picked their positions in the security space, to the point where even Intel has jumped into the game.

As for Cisco, it's refreshing to see the company making a splash in all the right pools. This deal makes a lot more sense than the 2012 ventures into wireless networking and media software. Sourcefire's focus aligns with Cisco's core strengths and makes the company stronger where it counts. Cisco is already hard to beat in the enterprise networking market, and this deal pumps steroids into the giant's hardest-working muscles.

This is how Cisco at last earns its Dow membership, and it's why I have a bullish CAPScall on Cisco shares. It's all about business-class networking.