So much for a slow summer for the iPhone. Apple (NASDAQ:AAPL) reported its latest digits last night, and the headline was an impressive 31.2 million iPhone units sold, well ahead of the Street's best guesses. However, it wasn't all sunshine and unicorns; there were some notable weak spots on numerous fronts. Let's dive in.

Revenue in the fiscal third quarter totaled $35.3 billion, near the high end of guidance. Net income was $6.9 billion, or $7.47 per share. Apple delivered gross margin of 36.9%, also at the high end of its forecast.

The strong iPhone sales go hand-in-hand with the healthy iPhone activation figures that Verizon reported last week. Older models continue to sell well, which is contributing to a precipitous drop in average selling price ($581 this quarter). The iPhone remains the biggest revenue driver, so investors cheered the outperformance here.

iPad unit sales, on the other hand, were less impressive. In fact, the 14.6 million iPads sold this quarter is the first year-over-year decline that Apple has ever posted in the product's history. There are a few reasons for the tough comparison. In the year-ago quarter, Apple had just launched the iPad 3, which was the first model to sport a Retina display. That led to a busy quarter as Apple filled channel inventory. Slowing sales this quarter are an inevitable consequence of shifting the iPad product cycle, since Apple refreshed the lineup in October. Channel inventory declined this quarter by about 700,000 units, making the comparison even harder.

Domestic domination is not enough
International performance was also a soft spot, with 57% of sales coming from outside the U.S., a noticeable sequential drop from the 66% notched last quarter. The "Greater China" segment also saw sales shrink to $4.9 billion including retail. 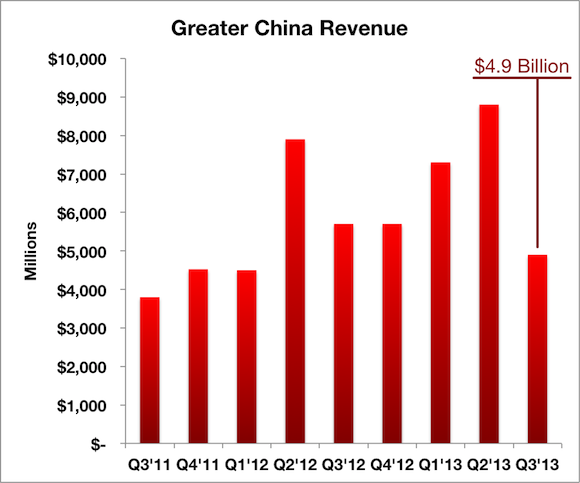 Apple is still planning to double its number of retail stores in the region over the next two years, although retail stores in China fared poorly. After isolating retail-only revenue in Greater China, average revenue per store fell by over half sequentially, to $23.6 million.

This is just another painful reminder that Apple needs to better address emerging markets.

Cash is not king
As expected, Apple's cash position took a hit from rising interest rates. Total cash increased to $146.6 billion, a modest sequential rise of $1.9 billion. Investors can tell that Apple's investment portfolio declined in value because accumulated other comprehensive income on the balance sheet swung abruptly from $964 million in March to negative $234 million in June.

Due to the way that Apple accounts for its investments, other comprehensive income is where Apple records market fluctuations from its long-term cash investments. Speaking of cash, where did the $17 billion that Apple just raised through a bond offering go?

$16 billion says Apple is cheap
Investors already knew that Apple raised that money to help fund its capital return program, but what we didn't know was the rate at which it would do so. Apple boosted its share repurchase program by $50 billion in April to a total of $60 billion, with the goal of executing it through the end of 2015. Apple just blew threw a big chunk of that allowance, likely in order to take advantage of how cheap shares are.

After the bond offering, Apple turned around and immediately -- less than a week later -- repurchased $16 billion in shares. Of that, $12 billion is through an accelerated share repurchase, or ASR, program and $4 billion were open-market purchases.

That's a huge figure that deserves some additional perspective. The amount that Apple just repurchased in one quarter is greater than Nokia's market cap. It's more than what Google paid for Motorola (before selling the Home division). Apple could have bought more than three BlackBerrys with that total. 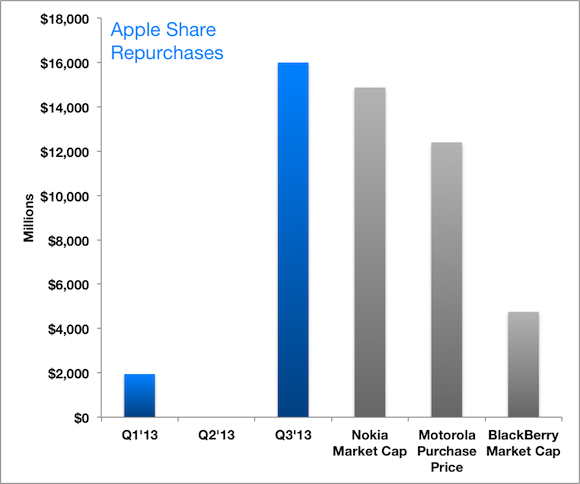 That's over a quarter of the entire authorization spent in one fiscal quarter, which allowed the company to retire approximately 32.5 million shares. That helped juice earnings per share, which otherwise would have fallen short of consensus if theoretically Apple had not bought back any shares.

That aggressive repurchase activity will save Apple $397 million alone in annual dividend costs considering the current $3.05 per share quarterly payout. At a weighted average rate of 1.85% on $16 billion, Apple is paying less than $300 million annually in interest to save almost $400 million in dividends. Not a bad deal. The tax deduction on the interest is just the cherry on top.

Apple is just three fiscal quarters into its capital return program, and it's already spent 30% of its allowance reinvesting in itself. If that's not putting your money where your mouth is, then I don't know what is.