When Google (NASDAQ:GOOGL) announced its new Chromecast device yesterday, tech sites exploded with initial reviews. Wired even called it "Google's Miracle Device." I wouldn't go that far just yet, but there are two reasons why the small stick could disrupt its streaming competitors.

Priced to sell
The first and probably the most obvious selling point for the Chromecast is its ridiculously low price: $35. That's significantly lower than Apple TV and even $15 less than Roku's cheapest streaming box. Google chose the perfect price point for launching such a device, considering its Google TV has never taken off and Apple TVs and Rokus already dominate the market. 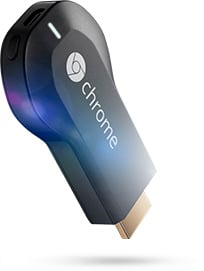 If Google had come in the $50 to $100 range, the device would've had to come with much more features, and couldn't be just the basic Wi-Fi device-pairing system that it is. As it stands, Chromecast is a simple way to stream music, movies, and video a from a user's PC, Android, or iOS device.

Which leads us right into the device's second major selling point: simplicity.

The beauty of simplicity
You'd think by now tech companies would have figured out that users won't pledge allegiance to just one company for all of their tech needs – although I've admittedly come close. Google understands that users are going to tap Netflix, YouTube, and others for entertainment, and they're going to access it all from devices using a range of operating systems.

Google has created a simple device that pairs popular streaming content sites to the TV. There's no new interface to get used to, no additional remote to use -- just pure and simple sharing from a device to the TV.

The one drawback for Chromecast is that it only taps into Netflix, Google Music, Google Movies and YouTube right now. For Chromecast to really take off, it'll need to quickly build up the number of apps the device works with. Potential customers that already have a way to access Netflix on their TV and don't mind watching YouTube on their computer or mobile device may not see the value in Chromecast -- even for $35.

Revenue streaming
It's hard to speculate on how much Google will benefit from the device right now, but there are a few possibilities. First is that Google will actually make a profit off of Chromecast's sales, even at its low price. The other potentially more lucrative avenue is through advertising on Google's services. YouTube's mobile ad revenue has tripled over the past six months, to $350 million. If Google can persuade customers to buy Chromecast and throw mobile content from devices to the TV, it could quickly grow that figure.

For now, I think investors need to simply take Chromecast at face value. It brings Google into customers' living rooms with a simple device at a low price. Google can then build on the device's features to make it compatible with more apps, while trying to avoid the unpopularity of Google TV. Chromecast's hurdle could be getting customers' attention in a growing and sometimes complicated market, but the low price point could be just what the device needs to get its foot in the door.