Hidden in the seemingly good news surrounding the June jobs numbers report was one disturbing trend, but one that investors can use to profit handsomely if the numbers continue to play out as they have.

According to the Bureau of Labor Statistics, despite the unemployment rate staying flat in June at 7.6%, the economy gained 195,000 more jobs and the average hourly wage increased as well, fueling more consumer confidence that's driving the purchase of new houses and cars. And it was because people were feeling better about their prospects that we had more people looking for work, which is why the unemployment rate stayed the same despite more people finding jobs. The BLS doesn't count you in its employment rolls unless you're actively seeking employment.

While I might cock an eyebrow at the idea that a $0.10 hike in hourly wages to $24.01 is what's driving the sale of new cars and houses, there's a deeper, darker trend at play that doesn't bode well for the long-term health of the U.S. economy.

Not only were many of the jobs created in lower-paying industries -- 38% of them were in leisure and hospitality -- but 5% of the total were temporary jobs. Some 8.2 million Americans were working part-time even though they'd prefer to be working full-time.

For an investor trying to play the "recovery," it's clear there's just one way to do so: temp agencies.

The American Staffing Association says that U.S. staffing companies employed an average of 2.86 million temporary and contract workers, or 2% of all nonfarm employment in the U.S., with temp jobs for June running 6.7% higher than a year ago.

Investors have taken notice of the trend with shares of ManpowerGroup (NYSE:MAN) rising 59% over the past year, Kelly Services (NASDAQ:KELYA) up almost 46%, and Robert Half International (NYSE:RHI) some 15% higher. 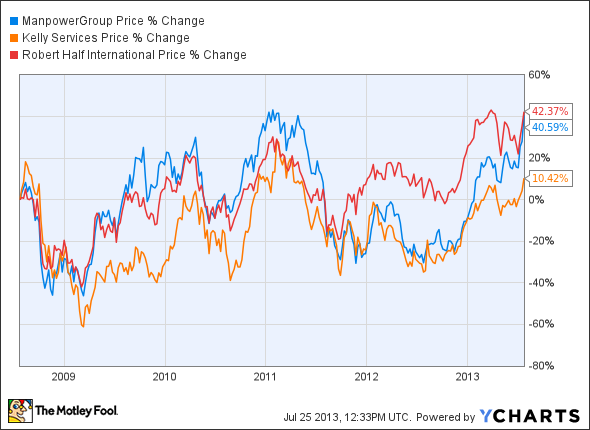 The much smaller Barrett Business Services (NASDAQ:BBSI) has done even better, soaring 154% over the last 12 months.

While that might suggest the opportunity to invest in them has passed, I believe their biggest gains are still ahead. While tentativeness among employers about whether the economy is really improving is helping employers to hire more temp workers, the coming implementation of Obamacare will fuel it further. Even with the employer mandate portion of the law being pushed out past the midterm elections to 2015 instead of going into effect on January 1, that just means more companies will be hiring more temp workers for a longer period of time to get below the thresholds the health-care law imposes.

Manpower's earnings results last week showed revenues dipping 3% as Europe's financial situation continued to weigh on operations. Though U.S. revenues were down 2% as well, adjusted profits were much higher, rising 38% to $1.05 per share. Robert Half, on the other hand, which has much lower exposure to international markets because it derives three-quarters of its sales from the U.S., saw revenues rise by 3%.

We'll see how it plays out when Kelly Services reports in two weeks, but with two-thirds of its revenues derived domestically, expect it to be closer to Robert Half than Manpower, particularly as Barrett just reported its results, and with it being a completely U.S.-based employment agency, it saw a 35% surge in revenues.

I don't think this rise in temporary employment is a temporary situation and think these agencies make for a good play on the jobs market, even if growing temp help isn't good for the long-term health of the economy. But because Manpower derives 85% of its revenues from outside the U.S., I'd be leery about making a bet there.