Yesterday the Dow Jones Industrial Average (DJINDICES:^DJI) dropped from Tuesday's record high, finishing Wednesday down 0.16% to 15,542. The S&P 500 took an even bigger dip, losing 0.38% of its value as utilities took some major hits. 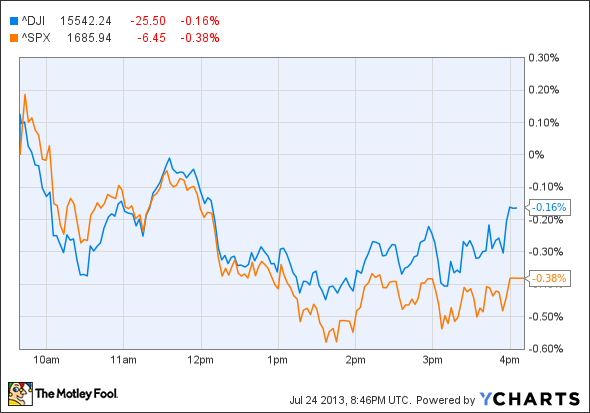 Apple's (NASDAQ:AAPL) earnings report proved to be a major positive force in yesterday's market movements. After jumping 3.9% in after-hours trading Tuesday evening, shares of the tech giant jumped an additional 5.1% throughout Wednesday. As analysts and investors continue to pick apart the long-term implications of Apple's beats on revenue and profit, as well as its 20% year-over-year iPhone sales growth, this stock could continue to make major moves over the next few months.

Yesterday's after-hours movers
Biotech company Sequenom (NASDAQ: SQNM) reported earnings after the closing bell yesterday, missing on both sales and profit. Analysts had expected $46.25 million in revenue, but Sequenom's $34.85 million proved far off the mark. On earnings, Mr. Market was willing to accept a loss of $0.21 per share, but the company's earnings clocked in at -$0.27. Investors seem to have had enough of the biotech: Shares are plummeting around 32% in premarket trading. Long-term investors may have seen Sequenom's downfall coming, as the company has repeatedly failed to live up to expectations. From failed takeover attempts to mishandled test data, there are plenty of reasons why shares have continually headed down.

Unlike Sequenom, telecommunications company 8x8 (NYSE:EGHT) hit the mark in its afternoon earnings report. Sales of $30 million exceeded analyst expectations by $400,000, while EPS matched predictions exactly at $0.06. The company has managed to grow revenue at an annual rate of 32% since 2007, and it has moved from 19,400 subscribers in 2009 to 33,660 in June. Shares of 8x8 are up 16% in the last three months, and they gained 1.4% in after-hours trading.

Can Sirius keep on playing?
Sirius XM Radio (NASDAQ:SIRI) topped analyst estimates in this morning's earnings release, matching second-quarter earnings estimates of $0.02 per share and handily beating top-line estimates with sales up 12% to $940.1 million. Even more encouraging, the company raised its full-year EBITDA estimate to $1.14 billion.

Shares of Sirius are up 19.6% in the last three months, and they're up 2.2% in premarket trading today. Investors will need to keep a close eye on subscriber base numbers, as well as revenue per subscriber as the company looks to pull profits. The radio world is increasingly competitive, and shareholders should keep their ears open for any sign of falling market share.