Caroline Bennett
(TMFCarrieFab)
Author Bio
Caroline wants to help make the seemingly esoteric concept of investing accessible to everyone... and write a few puns along the way.

High-speed data distributor Time Warner Cable (NYSE: TWC) has "replenished" its share repurchase authorization to $4 billion, it announced this week. The company has not yet announced any immediate plans to buy back shares; the timing of purchases will be based on a number of factors, including market conditions.

Additionally, Time Warner is keeping its dividend steady this quarter, at $0.65 per share of common stock. The company has paid this amount since February 2013, after it raised the payout 16% from $0.56 per share. Annually, the company's current payout adds up to $2.60, a 2% yield. The quarterly dividend will be payable in cash as of Sept. 16 for shareholders of record as of Aug. 30. 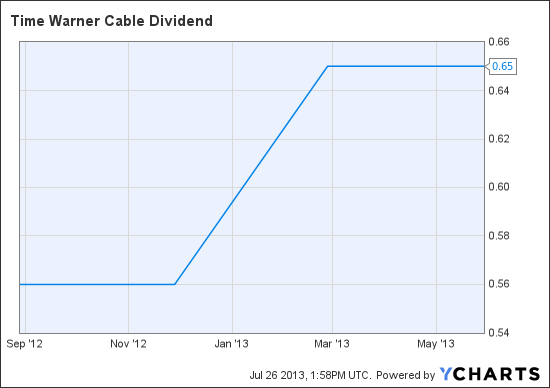