Have you ever wondered why Marvel's more recent films have done so well? I mean, really, how could Iron Man 3 earn $1.2 billion for Walt Disney (NYSE:DIS), almost twice as much as the $637 million Man of Steel produced for Time Warner (NYSE:TWX)?

Critical reception may account for some of the difference. (Only 56% of critics tracked by Rotten Tomatoes liked Man of Steel, versus 78% for Iron Man 3.) Robert Downey Jr.'s undisputed appeal in the role of Tony Stark and Iron Man might also be a factor.

If so, I suspect it's because fans see in Downey Jr. a nod to the comics they've grown up reading. Look at who Marvel hires to make its films. Many of them were comic book fans before they took on the task of creating a comic book film.

Actor Jon Favreau took particular care to appeal to fans (like yours truly) in making the 2008 breakout hit Iron Man. Joss Whedon is a longtime comics fan and one of the principal backers of Comic-Con: Episode IV -- A Fan's Hope, Morgan Spurlock's documentary love letter to fans of the medium. Next to the join the list: Anthony and Joe Russo, co-directors of next April's Captain America: The Winter Soldier.

"We keep saying this, but this is the best job we've ever had," Joe said during Marvel Studios' main hall presentation at San Diego Comic-Con. "I started collecting comic books when I was 10, so to be able to come and present this footage at Hall H is like a dream come true for us." 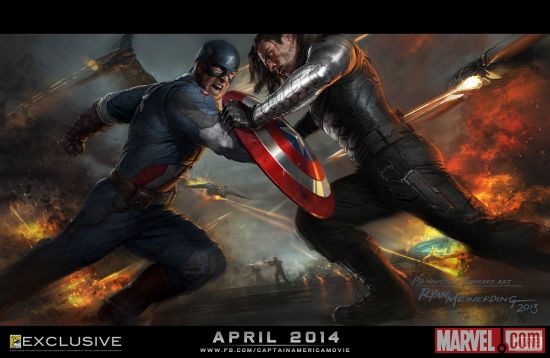 Will the Russos' love both for the "Winter Soldier" storyline from the comics and the overall medium translate into big screen success? For his part, writer Ed Brubaker, the man responsible for the film's source material, has said the script he read was "fantastic" and represented "the best Marvel movie."

We'll have to wait to find out whether Brubaker's high praise is deserved. But he isn't the only one involved with the film who's excited by its prospects.

"It would really be a problem if the franchise you were stuck with wasn't making good products. But it turns out Marvel knows what they're doing, so that every time you put the suit back on you get really excited and you can't wait to see what they're going to do," actor Chris Evans told the Comic-Con crowd. Winter Soldier is his third big-screen go at playing Captain America.

To be fair, DC and Time Warner also have plenty of fans behind the making of their films. Director Zack Snyder talked fondly of the medium in making Man of Steel and the film has done well, if not at the same level as Iron Man 3. Director Martin Campbell didn't bring the same enthusiasm to Green Lantern, and it showed both in reviews and at the box office.