With Apple's (NASDAQ:AAPL) underperformance over the past year, many tech-heavy investors have partially sat on the sidelines as the broader market continues to march to all-time highs. Investors aren't the only ones getting hurt by Apple lagging; brokers are getting hurt, too. 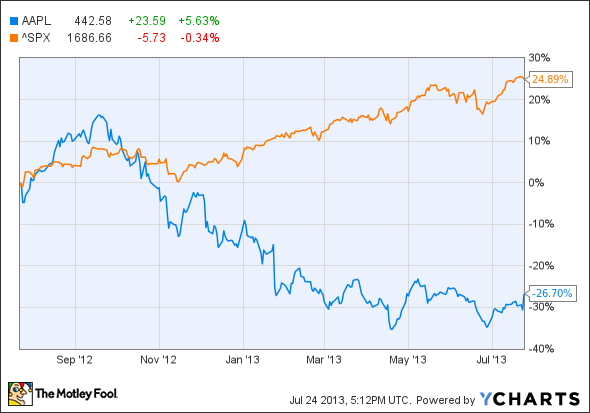 Put it on my tab

Margin trading is an extremely profitable business for all discount brokers, yet AMERITRADE's total outstanding client margin balances have remained roughly flat for the past year. A year ago, clients were borrowing an aggregate total of $8.7 billion. That figure is now $8.6 billion.

On the conference call, Tomczyk acknowledged that this is very much related to Apple, as the Mac maker is one of the most popular investments among margin investors:

So we've done some more research on this, and what we found out was basically that if you take our margin accounts, the buying power has not gone up as the market, in general. And the reason for that is our most widely held stock, our most actively traded stock, and our most margined stock is Apple, which has not participated in the rally, which has drawn in the buying power. So I don't think there's anything, as I call it, secular going on other than -- a very large company that makes a big part of our margin book has not participated in this rally over the last year.

Since a client's margin buying power is directly tied to the level of equity in the account, Apple's downturn has limited clients' ability to borrow even more. If Apple had participated in the broader rally, margin investors would see buying power rise accordingly, and many of these traders would inevitably use that allowance. The same storyline is inevitably playing out at other discount brokers as well, since this situation isn't unique to AMERITRADE.

Your broker is looking forward to Apple's recovery, especially if you're a margin investor.