The S&P 500 (SNPINDEX:^GSPC) took a break from its formerly breakneck pace today. A Federal Reserve meeting on the imminent horizon has spooked investors enough over the potential closing of that torrential firehose of money that the S&P wound up 6.3 points lower, with a 0.4% loss for Monday.

That doesn't mean that the S&P had no standouts. One company in particular stood head and shoulders above the rest, offering hope that at least one sector of the economy might be maintaining its strength after all.

CF Industries (NYSE:CF) was the real standout for the S&P 500 today and was the only stock to end up higher by double digits. The diversified fertilizer manufacturer soared 11.8% in the afternoon, after superinvestor Dan Loeb's Third Point Management revealed its stake in a quarterly investor letter. Third Point asserts that CF is cheaper than its peers and could afford to pay out a lot more in dividends. Loeb is right -- just take a look: 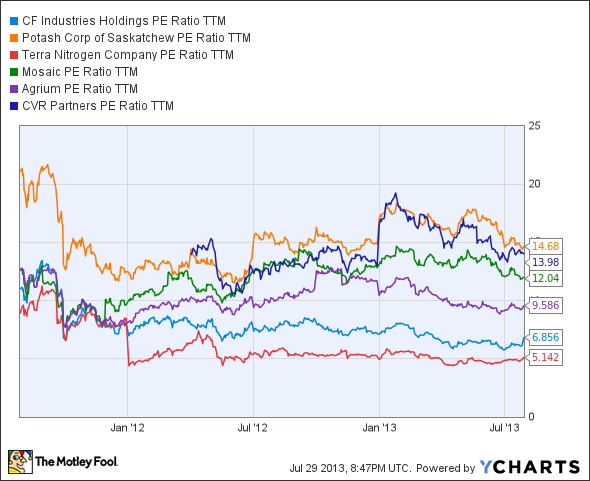 The exception, Terra Nitrogen (NYSE: TNH), is a master limited partnership that operates under somewhat different accounting rules. No other major fertilizer company trades as cheaply as CF, and the company is presently paying out just 18% of its free cash flow in dividends. There's a lot of room to boost that payout, which is currently good enough for a tiny 0.9% yield after the pop.

CF's big pop was the only major news-driven gain in this rather underwhelming day. The S&P's second- and third-place finishers, Interpublic Group (NYSE:IPG) and L Brands (NYSE:LB) (formerly Limited Brands), gained on sentiment rather than results.

Interpublic's pop was driven by positive investor sentiment surrounding the megamerger of Omnicom and France's Publicis, which analysts are viewing as a net benefit for the entire advertising industry. Interpublic could be the target of the next big ad-industry merger -- or it could pick up new clients that leave the new Publicis Omnicom as a result of conflicts or agency reviews.

L Brands earned the third-largest pop on the S&P 500, but there's no real reason behind it. In fact, this pop seems a little counterintuitive in light of the fresh competition L Brands' Victoria's Secret now has in the form of Hanesbrands' recent acquisition of Maidenform. The Hanes-Maidenform tie-up puts more pressure on Victoria's Secret from the lower end of the market, but today's investors seem to believe that L Brands can provide plenty of support for their portfolios.