After markets closed on Wednesday, Las Vegas Sands (NYSE:LVS) reported second-quarter earnings. The market reaction was slightly negative, with shares down around 1% on volume well above average at the time this article was written.

The double-digit revenue and EPS growth notwithstanding, results were still short of analysts' expectations. Revenue came in at $3.24 billion while estimates were put at $3.3 billion. GAAP earnings per diluted share were $0.64, $0.04 short of estimates.

The growth story
In light of not meeting expectations, performance growth was still sizable. Hold-adjusted earnings before interest, taxes, depreciation, and amortization (or EBITDA) increased 29% to $1.17 billion. This continued uptrend in EBITDA, illustrated in the chart below, shows how Sands' profitability has been increasing as it gains traction in Asia. 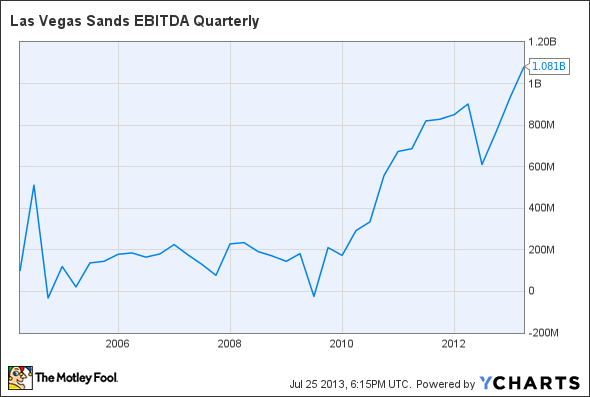 Earnings per share were up 120.7% year over year from $0.29 to $0.64, driven primarily by strong performance in the Macau, China, locations. Overall, the story of Las Vegas Sands' earnings was that of a company reaping the fruits of their foreign direct investments.

Asia is a cash cow
The future for gambling is overseas, particularly in Asia. Macau surpasses Las Vegas in gambling revenue generation and is quickly becoming a global vacation destination. The Sands operates four venues there. Among them is the Venetian Macau, the largest casino in China. Sands China, which operates all the Chinese properties, increased revenue by almost 40% to $2.07 billion. Macau represented roughly 64% of total net revenues for the Sands in the second quarter.

The monolithic Marina Bay Sands Casino in Singapore boasted an impressive 99.4% occupancy rate for the quarter, far ahead of any other Sands location. However revenue growth was much tamer than that of the sizable growth at the Macau properties. The important measure of VIP play, rolling chip volume, was up 25% at Marina Bay. On the flip side, win percentage at 2.53% came in below the Sand's own estimates of 2.7% to 3% meaning that Marina Bay experienced some bad luck this past quarter at the Singapore casino.

Investor takeaway
All of the above information is already well known in the marketplace and, I believe, has been taken into account in the stock price. The real opportunity lies in continued casino expansion in other locations. Moving forward, I would watch for progress in talks about the liberalization of gambling in surrounding Asian countries like Japan or India as major opportunities for Las Vegas Sands to expand its casino empire. First movers that obtain government approval will make the most of these opportunities, just like Sands did in Macau and Singapore.