A recent news story on the mental acuity of people 90 years old and above, covered here in a nice piece on Bloomberg.com, likely caught the imagination of some who have wondered what later life might be like and perhaps inspired a few who are already there. According to a Danish study, nonagenarians today possess greater mental sharpness than in previous decades. Those who cross the age of 90 are performing better on mental tests and experiencing a higher quality of life than test groups from just 10 years before.

How much should aging affect the way we invest? The financial industry has an autopilot plan for seniors that rests on two sacred directives: preservation of capital and the generation of monthly or quarterly income. But each investor's circumstances, goals, and tolerance for risk are different, regardless of age. Every portfolio is unique and begs its own nuanced construction.

There's no guarantee that the stock that seems virtually risk-free today will be so when you wake up tomorrow morning. Remember just five years ago, when so many investors thought that large multinational U.S. investment banks were one of the safest sectors to park money in and collect a dividend? To put an even finer point on this idea, there isn't a stock investment that doesn't entail some degree of risk.

Senior investors, if you only come away with one point from this article, please remember this: When a broker, relative, colleague, or friend presents to you a "safe" stock that will provide income, be sure to ask them to explain to you the risks associated with that stock. We could all get better at understanding the potential problems corporations face when they execute their business plans. Incidentally, each publicly traded company's annual 10-K report filed with the SEC (which you can access from sites such as finance.yahoo.com) contains a mandatory section labeled "risk factors," where companies must identify the various risks that face their businesses.

So let's unshackle ourselves from these two mantras of later-years investing and examine four stocks that, while not primarily associated with capital preservation and which may or may not provide dividend income, are still relatively stable, fit a growth theme in the current economy, and exhibit risk that we can identify and live with.

Maxing the mix for stronger profits
Unilever (NYSE:UL) is one of the world's largest consumer goods conglomerates. Over the last few years, it has increased revenues at a faster rate than ambitious competitors such as Procter & Gamble. Revenues have grown 30% over the last four years. Last year, the company posted nearly $67 billion in revenue.

For the last 12 months, Unilever has employed a growth strategy it calls "Maxing the Mix." This initiative seeks to pare down the number of total products the company sells worldwide, focusing resources on higher-margin stock keeping units, or SKUs, with sales growth potential. Though we're not necessarily looking for income in this exercise, Unilever does provide a very respectable dividend of 3.5%.

With Unilever, your risk is primarily in the company's exposure to developing countries. Unilever now obtains 40% of its revenues from emerging markets. As you may have read, economies such as Brazil, India, and China have slowed unexpectedly recently. If emerging market consumers lose purchasing power as they have in the U.S. (where Unilever growth is essentially flat), the company's revenue and earnings trajectory may suffer. You can live with this risk because "Maxing the Mix" now while growth is strong will benefit Unilever if it begins to forecast a slowdown in its international operations -- the company will be better positioned to quickly manage its inventory and sales lines to adjust to weaker global demand.

The upside in upscale
Would you invest in a high-end retailer while the U.S. economy still seems as if it could decelerate again any day now? I did mention that this exercise was about taking risk. But Macy's (NYSE:M) is led by a very engaged and thoughtful management team.  The company employs an "omnichannel" strategy to capture sales through its stores, traditional online channels, and mobile devices. Select stores act as retail points as well as fulfillment centers for online and mobile device sales. Internet sales have grown approximately 40% over each of the last two years, and while this only contributed 2.2% to Macy's total top line revenue growth in fiscal 2012, the contribution will increase in 2013. The company is widening its base of stores that act as fulfillment centers by more than 70% in 2013, from 292 stores that can service web orders, to more than 500.

The risk of the U.S. economy sliding back into recession is the most salient threat a higher end retailer such as Macy's faces. However, during the last recession, the company managed to steadily grow its profits. Since Jan. 1, 2009, the company's stock price has finished each year higher than it started, and 2013 is on track to be the fifth year of this pattern. As long as the company continues to emphasize its deep connection with its core customers (through a program it calls the "My Macy's localization initiative" ), and doesn't pull a J.C. Penney on the very base that supports it, the company should be able to weather another prolonged dip in U.S. economic activity.

An indirect way to invest in tech
Genpact (NYSE:G) provides business process management and information technology services to companies around the globe. The company began as an internal unit of GE Capital in 1997, tasked with improving productivity within the division and other operating divisions at GE. Genpact went public in 2007. Genpact's primary offering is consulting and outsourced services, and as a service company, it posts robust margins: in its most recent quarter, it achieved a gross margin of 38% and a net profit margin of more than 9%. Except for a dip in 2009 similar to so many other corporations, the stock has been steady over the last few years, outperforming the market in 2013: 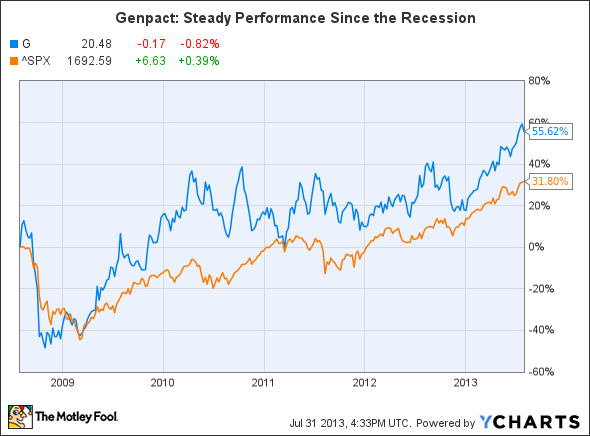 Genpact is a new economy stock that isn't a start-up or social media concern ladled with a sky-high valuation or a business model yet to prove. The company makes consistent profits now, but can continue to grow even if the world economy sputters along for the next few years: Corporations turn to Genpact as much to outsource non-core processes as to gain the benefit of their business expertise.

The risk in Genpact comes from an unexpected source: GE. Recall that Genpact grew out of GE; it still counts the company as its largest customer, deriving more than 26% of 2012 revenue from its former parent. We can live with this risk as Genpact is steadily decreasing this dependence, which was as high as 38% in 2010. And it's a fairly safe relationship in my opinion, as the company's expertise is rooted in "Six Sigma" and "lean" manufacturing -- operational techniques embraced by GE. Thus Genpact is better equipped to understand and advise GE than any of its competitors.

Canadian stability with a twist
The Bank of Nova Scotia (NYSE:BNS), also known as "Scotiabank," is one of Canada's "Big Five" banks. Canadian banks held their own during the recession years of 2008 and 2009, and won investor interest for being associated with the relatively stable Canadian economy. Scotiabank presents an intriguing investment opportunity due to its status as a steady Canadian bank, with diversified international revenues as a potential growth ingredient. Last year, the company booked revenues of $19.9 billion. Almost two-thirds of that revenue derived from banking business, split very evenly between Canadian banking ($6.3 billion) and International banking ($6.5 billion). The company's international banking is primarily focused on the fast-growing economies of Latin America, including Columbia, Peru, and Chile, with a growing base in Asia.

Similar to Unilever, your risk in BNS is its investment in developing economies, but as I've already noted, this is mitigated by the balance with its solid Canadian banking business. BNS trades at a relatively attractive trailing twelve month P/E ratio of 10.7, and again, like Unilever, it incidentally throws off an enticing dividend yield of 4%.

A final thought
Reaching your best years doesn't necessarily mean that every last stock you own should be conservative and boring. Whether you are beginning to think about changes to your investment style in your 50s or are enjoying the renaissance of your 80s and beyond, it's never too late to understand what each stock in your brokerage account will potentially contribute to your current goals and the possible pitfalls that each presents.