"We exaggerate misfortune and happiness alike." Honore de Balzac wrote. "We are never as bad off or as happy as we say we are."

How true, and how relevant to today's hyper-sensational media.

Student debt has put a lot of people in awful financial situations. But anecdotes aren't trends, as they say. There will always be students who borrow a quarter million dollars for a degree that makes them no more employable than they were before it. These examples dominate stories on student loans in a way that portrays them as common.

But they are not.

Or think of it this way: The average student loan is smaller than the average new car loan.

Or how about this: Statistically, about the same percentage of the population will end up with a net worth above $5 million than will graduate with more than $100,000 of student debt.

Student loans will hurt a lot of people. But you have to keep your gloom in perspective.

Overblown story No. 2: The recovery is being driven by part-time jobs
Take these headlines from the last week:

US Turning Into a Part-time Worker Economy

A disproportionate number of the added jobs were part-time

There are hundreds of similar articles.

Each has a hair of truth to them. Part-time jobs have made up a big share of job gains in recent months.

But the Bureau of Labor Statistics' measure of part-time work comes from a small survey of households that is notoriously volatile, rather than the much larger survey of businesses that's used to calculate the monthly jobs figure. We regularly fret over job swings measured in the tens of thousands, but the survey used to measure part-time workers has a margin of error of plus or minus 400,000 per month. It tells you broad trends, but never specific month-to-month levels.

And the broad trend is clear: Workers labeled as part time for economic reasons -- those who want full-time hours but are working less than 35 hours per week -- have been dropping since the recession ended four years ago: 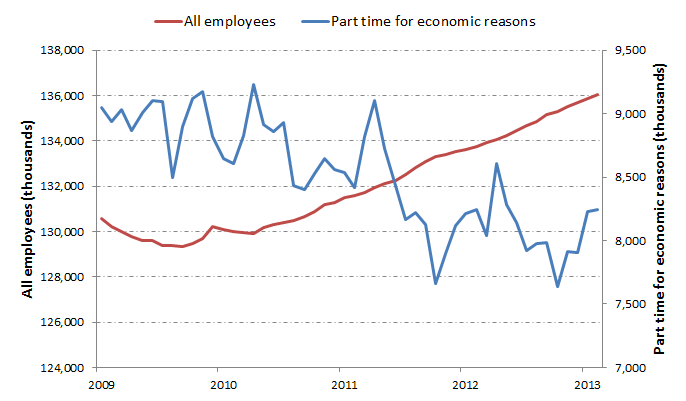 Every jobs report over the last four years can be summed up in five words: Things are getting better slowly. But that doesn't make a compelling narrative, so we resort to looking for things that aren't really there.

A lot of pension funds are in terrible shape, some beyond repair. Detroit is a good example. But most pension doom is based on two factors, neither of which is permanent.

First, as economist Dean Baker shows in this paper, the main cause of underfunded pensions is -- surprise -- the financial crisis. Pension fund assets took a walloping. If public pensions had earned the risk-free rate of return available in Treasury bonds from 2007 to 2010, most of the current shortfall would disappear.

Shoulda, woulda, coulda. But pointing this out is important because pension funds aren't investing for the next quarter or the next year; they're typically investing for the next several generations. They have time to wait for below-average returns to be offset by above-average results. Last year, I asked Joseph Dear, chief investment officer of CalPERS, the nation's largest pension fund, about his pension's poor performance. He replied:

It's not been so great for the past ten years, but if you look at big cycles in investment and see 10-year returns from equities relatively low, what we've seen after that is a return to better returns, a reversion to the mean. So I think there is a reasonable basis to be confident.

We are coming off one of the worst decades in history for stock and real estate returns. It is intuitive to extrapolate these low returns into the future. But that's a bad assumption. History shows that booms follow busts -- which is what's happening now, with the S&P 500 up 172% in the last four years.

But as interest rates rise, the opposite can occur, with pension liabilities falling. Here's Joseph Dear again last year:

This is already happening. As interest rates on 10-year Treasury bonds climb from 1.7% earlier this year to 2.6% today, pension liabilities are declining. According to HR Consulting company Mercer, rising bond yields this year have reduced S&P 1500 pension deficits by a combined $150 billion. Pension funding improved from 80% in April to 86% in June. That's the best figure in two years. "If rates got back up another 1.50 percentage points, we'd certainly be in a very good spot from a pension funding perspective," Mercer's Jonathan Barry told The Wall Street Journal.

Chin up
Student loans are a problem, part-time jobs mask the health of the jobs market, and many pension funds are in trouble. But reality is never black and white; it's nuanced and constantly changing. Never let sensational stories get in the way of the bigger picture.

What Marqeta's CEO Stepping Down Means for You