Plains All American Pipeline (NYSE:PAA) reported second-quarter earnings yesterday, beating analyst estimates on the top line and missing on the bottom. Plains recorded revenue of $10.3 billion and earnings per unit of $0.57, which beat consensus estimates of $9.9 billion and missed estimates of $0.60 per unit, respectively. There is more to an earnings statement than analyst expectations, so let's take a look at three key takeaways from Plains' announcement.

1. Return to baseline
Over the course of the past year, favorable market conditions resulted in lights out numbers for the partnership's supply and logistics segment. Conditions are still favorable, just not as favorable as they have been in the past. Much of the partnership's margin in the segment has been eroded by the collapse of the Brent-WTI spread. As a result, adjusted segment profit dropped 30% year over year, though the segment's six-month performance is still up 34% compared to the same period in 2012.

You can see how the remaining segments performed compared to the second-quarter results from last year in the chart below: 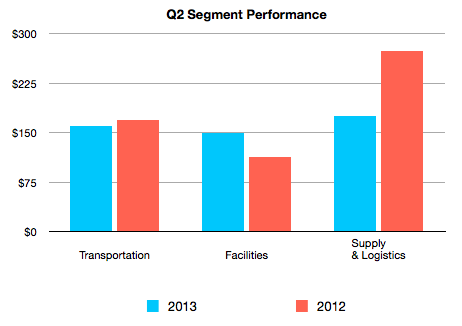 It is important for investors to note that management told us to expect the drop in performance of the supply and logistics segment, and affirmed that regardless of the comparisons of year-over-year performance, it still fell within guidance and contributed to the success of the partnership's quarter overall.

2. Adaptation
Midstream companies are quickly trying to adjust to producers' unique needs in certain oil plays, and in most cases that has meant adding, or increasing, rail's presence in their asset footprints.

For Plains, adding rail was a stroke of brilliance and led to a 29% pop in profit for its facilities segment. The partnership had loading and unloading volumes at its new rail facility of 231,000 barrels per day. Those volumes did not exist last year, and proved to make a difference this quarter, as facilities segment earnings were $35 million higher than last year.

3. Distributions
Plains had given guidance of a 9%-10% increase in the annualized distribution this year, compared to 2012. The partnership has executed thus far, raising payouts by 10% in the first quarter and 10.3% this quarter.

The partnership's distributable cash flow was down year over year to $342 million. Despite the drop, it was more than enough to cover the quarter's $0.5875 distribution.

Foolish takeaway
It was a great quarter for Plains All American. The company joins midstream peers Kinder Morgan Energy Partners (UNKNOWN:KMP.DL) and Enterprise Products Partners (NYSE:EPD) with investor-friendly second-quarter results. Kinder Morgan increased revenue by $1 billion, while Enterprise provided a coverage ratio of 1.5 times distributions. Yield hungry investors will want to take a closer look at these three opportunities, as all are sporting yields above 4%.