Just before Hawaiian Holdings' (NASDAQ:HA) recent earnings report, I wrote that the company -- the parent of Hawaiian Airlines -- was on the mend following several quarters of underperformance. Hawaiian subsequently posted a strong earnings beat along with a positive outlook for the rest of the year, confirming this picture. 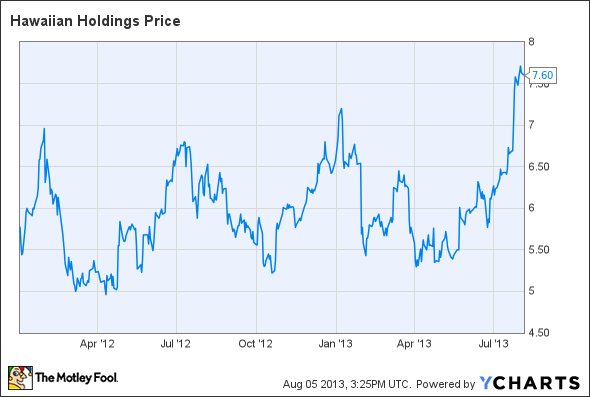 As a result, Hawaiian's stock finally broke out of the $5-$7 trading range it had occupied since the beginning of 2012, moving as high as $7.88. With the stock now up more than 40% since May, is it time for shareholders to pocket their gains? Or is Hawaiian likely to continue producing above-market returns?

Rationalizing capacity
One of Hawaiian's big problems last fall and this winter was overcapacity between the U.S. West Coast and Hawaii (the carrier's largest market). For several quarters, the company has been projecting that the supply situation would improve in the second half of the year. Hawaiian CEO Mark Dunkerley confirmed on the recent earnings call that West Coast industry capacity is set to decline 1% this quarter and 5% in Q4. Hawaiian and its competitors are trimming some of the capacity they added last year, which should improve unit revenue results.

Hawaiian Airlines is also cutting capacity on some of its longer-haul routes in order to improve results. The carrier is dropping service to the Philippines entirely, after finding that it could not fly the route profitably due to severe price competition from Philippine Airlines. Hawaiian is also seasonally reducing service to New York by two flights per week to better match demand, while redeploying that capacity to Australia and New Zealand, which are seasonally stronger in the fall.

Slower growth and maturation
The key opportunity for Hawaiian Airlines investors over the next few years is margin expansion driven by the maturing of new routes. In the last three years, Hawaiian Airlines has begun service to 10 new long-haul markets, primarily in countries where the carrier had not previously operated.

In the airline industry, new routes like these generally take two to three years to fully "mature" and reach peak demand. As a result of Hawaiian's rapid expansion, only two of the company's new routes are mature, according to CEO Dunkerley.

Unit revenue on Hawaiian's maturing routes should improve significantly as demand builds over the next few years. Up until now, unit revenue gains on these routes have been offset by the introduction of new routes. However, Hawaiian's growth rate is set to moderate beginning this quarter.

Indeed, while Hawaiian Airlines started service to Taiwan last month, the company does not plan to introduce another new long-haul route until it begins flying to Beijing next April. Moreover, Hawaiian's fleet plan entails minimal growth for the next three years. (The company will return to a faster growth rate in 2017, when it begins receiving next-generation aircraft from Airbus.)

This period of slower growth over the next three to four years should allow Hawaiian to improve the profitability of its current route portfolio. As the company figures out what works and what doesn't, it will be better able to match capacity to demand in each market. This could drive the company's pre-tax margin significantly higher.

How big could the gains be? If we look back to 2009 and 2010 -- before Hawaiian's recent growth spurt -- the company produced pre-tax margins of 8.2% and 6.3%, respectively. By contrast, Hawaiian's pre-tax margin in 2012 was 4.4%, and profitability will be even lower in 2013 due to the company's significant Q1 loss. A return to Hawaiian's historical profit margin could therefore drive a doubling of EPS, which would support a significantly higher stock price.

Foolish bottom line
Hawaiian Holdings has seen its stock price soar over the past few months, as the outlook has improved. However, there is still plenty of upside for this company; the stock trades for just eight times expected 2013 earnings and less than six times expected 2014 earnings. Hawaiian's slower expected growth for the next several years should drive the company's pre-tax margin back to the high single digits, which would cause rapid earnings growth over that time period. Sooner or later, earnings growth of that caliber is bound to pull the stock higher.