On Thursday, Keryx Biopharmaceuticals (NASDAQ:KERX) announced that it had submitted a New Drug Application, or NDA, for iron-based phosphate binder Zerenex. The company's only drug demonstrated impressive results in treating elevated serum phosphate levels in patients with chronic kidney disease, or CKD, on dialysis. Approval for the drug would be a big boost to Keryx, and absolutely critical for the company's existence. Given the successful phase 3 trial, there likely won't be any problem gaining approval; but that isn't where this story ends.

Is novelty still an issue?
Let's recap the Keryx story quickly. Shares took off after results were announced in late January, but got crushed after a report came out questioning if the drug would be granted New Chemical Entity status. Being confirmed as an NCE grants an additional five years of exclusivity, while its absence allows for a quicker path to market for generic drugs. The question is whether Zerenex (ferric citrate) is chemically different enough from ferric ammonium citrate -- another approved phosphate binder -- or simply a derivative of that compound.

Analyst Jason Butler of JMP Securities doesn't think it will be an issue. Judging from Keryx's share price; neither does the market. 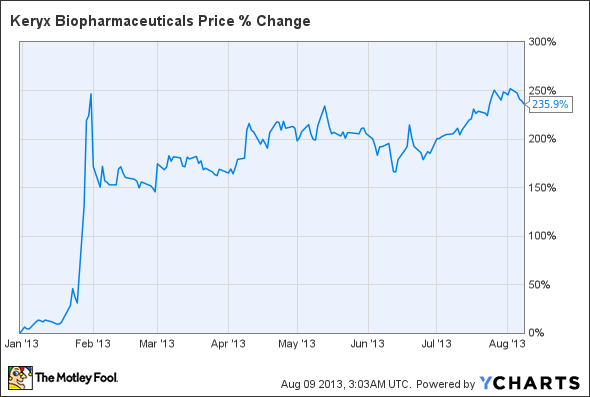 I am no expert, and losing out on five extra years of exclusivity would be a blow for investors and the company, but Zerenex does seem to have a big advantage over other phosphate binders. The phase 3 trial showed that the drug significantly reduced the need for intravenous iron.

What would approval mean?
Zerenex would reduce the need for anemia drugs such as Aranesp and Epogen from Amgen (NASDAQ:AMGN). The two drugs combined for $4 billion in sales for the company in 2012, but have six total generic competitors racing toward them. That's potentially bad news for generic therapies, and really bad news for Aranesp and Epogen. Not bad for Zerenex, though.

Keryx's drug will compete with other phosphate binders such as Renagel (sevelamer) from Sanofi (NASDAQ:SNY), which will have a marketed generic competitor from Impax Laboratories in the beginning of 2014, and Phoslo (calcium acetate) from Fresenius. Sanofi sold $392 million worth of its phosphate binder in the first half of 2012, but Zerenex and generic competition should quickly eat away at its market share. If Zerenex lives up to its potential, and its advantages play out, it could generate a sizable revenue stream for Keryx and investors.

Foolish bottom line
Keryx shouldn't have a problem getting Zerenex approved. Even with its advantages, however, investors need to remember that the drug remains the company's sole product -- in the pipeline, or elsewhere. That makes an investment in Keryx a little too risky for me because there is very little room for error. Even if everything works out in the end, I think I can find investments with better potential returns elsewhere.