Way back on March 5, I went out on a limb to convince investors they should buy shares of Darling International (NYSE:DAR).

After all, even though the country's largest and only publicly traded rendering specialist had just missed quarterly estimates for both earnings and revenue, I still thought its core operations were sound. What's more, shareholders could also look forward to the launch of the two-years-in-the-making Diamond Green Diesel, Darling's joint biofuel venture with oil giant Valero Energy (NYSE:VLO).

Of course, Darling and Valero would ultimately split the profits 50/50, but I also pointed out that while the plant's potential output would only be able to boost Valero's earnings by around 2%, the much smaller Darling International stood to grow by around a third.

Sure enough, last Monday marked exactly five months since that call, and shares of Darling International were hitting a new 52-week high on the heels of both a strong earnings report and the official opening of the DGD plant in late June.

All told, shares of Darling had risen nearly 28% over that time, easily outpacing the S&P 500's perfectly respectable 12% gain: 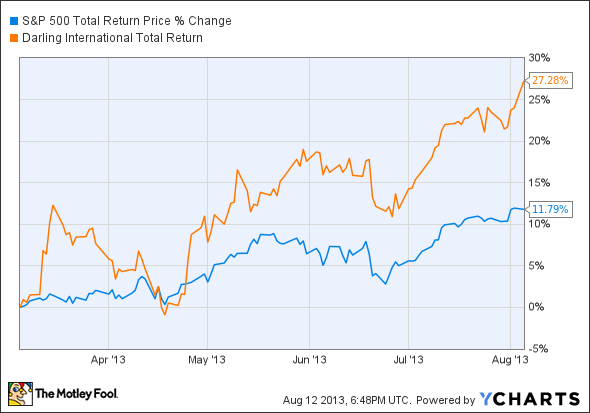 But if you think you've missed Darling's gravy train after this rise, think again.

To be sure, shares of Darling are down around 4% over the past week, thanks primarily to the company's subpar earnings report last Thursday. When all was said and done in the second quarter, Darling told investors that year-over-year earnings declined 29% to $0.22 per share, while sales dropped 3% to $423.6 million.

For those of you keeping track, analysts on average were expecting earnings of $0.26 per share, with revenue of $435.7 million.

So what gives?
And why, exactly, is this not a bad thing for investors?

According to CEO Randall Stuewe, there are three significant -- and temporary -- reasons for the moderation from the company's strong performance last quarter.

First, the company saw prices for its pet food grade proteins decline, thanks to an expected seasonal slowdown in the pet food market. Apparently, though, this is usually offset by a pickup in demand for the "aquaculture" industry (think fish farms), but cooler spring temperatures have slowed aquaculture demand so far this year.

Next, despite the fact that Diamond Green Diesel is up and running, Darling still had to prepare for start-up by shipping a significant amount of feedstocks to the plant, the accounting treatment for which required they defer more than $2 million in earnings for the quarter. For some perspective, taking those deferred earnings into account would have boosted Darling's earnings by nearly $0.02 per share on the same basis.

Finally, Darling's expenses rose as a result of higher medical costs, acquisition-related costs, and the installation of a new companywide Oracle database system.

Wait... acquisition costs?
That's right: Just last week in conjunction with its earnings release, Darling also quietly announced it has agreed to acquire the used cooking oil collection and industrial residuals operations of Terra Renewal Services, with the deal expected to close by the end of this month. According to Stuewe on the earnings conference call, the folks at Darling have apparently wanted to acquire Terra's operations for years.

Terra's industrial residuals business, for one, operates in 24 states, converting wastewater streams from the food processing and slaughter industry into "high-value protein and fat ingredients" -- something Darling has already been gearing up to do with its plant in Hampton, Fla., which has undergone some modifications in preparation over the past few months and is set to start up any day now.

Back to DGD
Diamond Green Diesel, for its part, is currently running just as Darling and Valero have expected, putting out around 9,300 barrels of biodiesel per day. According to management, Darling expects the plant to be able to ramp up to full volume output by the end of the third quarter. As per their usual habits for the past few quarters, they also reminded investors that their pro forma earnings per share in Q2 would have been around $0.10 to $0.12 higher.

In the end, putting aside normal wider-industry pressures squeezing Darling's margins, the company remains healthy as ever and appears to be firing on all cylinders. As a result, I'm convinced the recent pullback presents a perfect opportunity for patient long-term investors to buy now.