Investors love stocks that consistently beat the Street without getting ahead of their fundamentals and risking a meltdown. The best stocks offer sustainable market-beating gains, with robust and improving financial metrics that support strong price growth. Does Strayer Education (NASDAQ:STRA) fit the bill? Let's take a look at what its recent results tell us about its potential for future gains.

What we're looking for
The graphs you're about to see tell Strayer's story, and we'll be grading the quality of that story in several ways:

What the numbers tell you
Now, let's take a look at Strayer's key statistics: 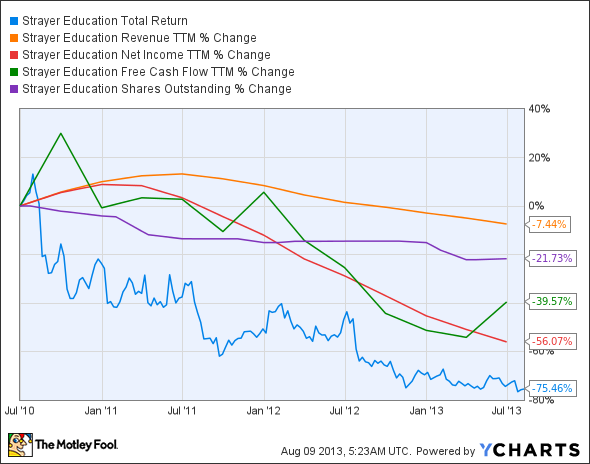 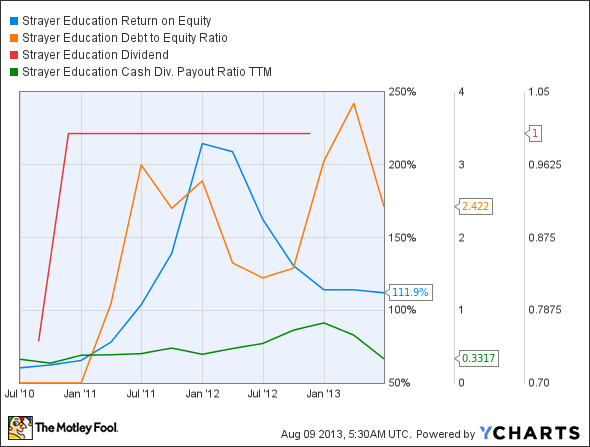 How we got here and where we're going
Strayer earns more passing grades today than might be expected for a stock that's fallen so far. The for-profit educator earned five out of nine possible passing grades, but two of those were granted more because of a technicality than because the company is showing real improvement. A major debt raise in 2011 also cost it a failing grade. Let's dig a little deeper to find out what Strayer is doing to right this listing ship.

Strayer's revenue and income both declined by double-digit percentages year over year in its latest quarterly report, which is never a good sign. However, these figures exceeded analyst expectations -- but in this case, that didn't stop its stock slide from picking up steam. Strayer's management blames an ongoing slowdown in student enrollment, which has seriously affected the entire for-profit education sector. Fool contributor Jeremy Bowman notes that the apparent decline in enrollment might be blamed at least in part on an ongoing Obama administration offensive against the industry's student-loan practices.

According to the National Student Clearinghouse Research Center, total student enrollments on campuses across the U.S. declined about 2% year over year. For-profit education has thus far felt the worst of this drop, but if it's not reversed, there may be little hope for the sector to turn its troubles around.

Putting the pieces together
Today, Strayer has some of the qualities that make up a great stock, but no stock is truly perfect. Digging deeper can help you uncover the answers you need to make a great buy -- or to stay away from a stock that's going nowhere.