Back in October, I asked whether the third-quarter earnings coming out of the for-profit education sector were a sign that the industry -- as we know it -- was nearing its end. My thesis was based on the fact that enrollment in the schools was falling and the government was looking to end its easy-money policy in paying tuition for students who simply weren't benefiting from the schools.

Below, I'll let you know how some of the industry's biggest players have fared, and at the end, I'll offer up access to a special free report on our top stock for 2013.

Apollo Group (NASDAQ:APOL)
There's no for-profit educator as big as Apollo, the parent group of the 300,000-student University of Phoenix. When you're looking to see how the entire sector is doing, Apollo is a logical place to start.

The school announced earnings in early January, and the results weren't pretty. Though earnings were actually up compared to the same period in the previous year, there were significant declines in student enrollment. 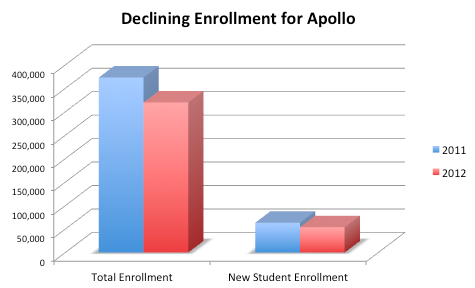 The school currently has roughly 320,000 students registered, which is a 14.3% decline from the same time last year. And though it may be hard to appreciate the second cluster on the graph, the decline in new student enrollments is also significant, as they fell by an even larger 15.1%.

Adding to the company's list of concerns, Apollo announced that 91% of consolidated revenue and over 100% of operating income is coming from one source: the United States government. That exceeds the 90/10 rule set by the Department of Education, though Apollo has a slight reprieve since the rule is calculated based on the trailing-two-year ratio.

But possibly most important, Apollo received word just this past January that the University of Phoenix would be placed on probation by the Higher Learning Commission. The designation is due to the fact that the commission believed: "the University of Phoenix has insufficient autonomy relative to its parent corporation and sole shareholder, Apollo Group." The Commission also said that there were concerns with the company's retention and graduation rates, and assessment of student learning, among other things.

Other schools having a rough outing
Shareholders in ITT Education (OTC:ESIN.Q) and Strayer (NASDAQ:STRA) have also dealt with their fair share of unpleasant news lately.

ITT's stock plunge was predicated on news that the SEC was investigating the company's PEAKS Private Student Loan program and the accounting of those loans. It probably doesn't help that total student enrollment fell 16.6% in 2012, and new student enrollment decreased 13.9%.

Shareholders of Strayer met bad news as well last week. Average enrollment for the school fell 8% in 2012, with revenue falling 10% and earnings per share sinking 35%.

Are there any bright spots?
The earnings season wasn't all bad for shareholders, though.

Shares of DeVry (NYSE:ATGE) took a big jump in early February. Though revenue was down 3.6% for the fourth quarter, earnings were up 500% -- mainly due to a really poor fourth quarter last year and a decrease in student service expenses.

That said, undergraduate enrollment in the school's largest segment -- business, technology and management -- declined 14.9%, while new student enrollment declined by 4.7%.

Education Management (NASDAQ: EDMC) was another stock that pleased shareholders recently. I would have to say, however, that this was more due to incredibly low expectations being beat than a significant improvement in the underlying business.

For the fourth quarter, the company logged a revenue decrease of 11.2%, combined with an earnings decrease of almost 50%. More important, total average enrollment fell by 12.7%, while new student enrollment dropped even more -- by 21.9%.

Is there a takeaway?
Though there were some bright spots for investors, there's no doubt that the for-profit education model remains in flux. Where exactly things will stabilize is impossible to tell -- but for now, the chickens are coming home to roost for an industry that put easy profits far higher on its list of priorities than the students it was serving.