The market is down slightly today, but that doesn't mean there's no news. Long-term investors should take note of today's reports on the housing market, which showed that new construction is staying resilient despite the higher mortgage rates. After yesterday's 1.47% drop, the Dow Jones Industrial Average (DJINDICES:^DJI) is relatively flat today, down 0.26% as of 1:20 p.m. EDT while the S&P 500 (SNPINDEX:^GSPC) is down 0.37%.

While the Thomson Reuters/University of Michigan Consumer Sentiment Index dropped in August after hitting a five-year high in July, the three other economic reports are more positive signs for the economy. Earlier this summer Bernanke's talk of tapering spooked the bond and mortgage markets, leading to a sell-off and a jump in rates. 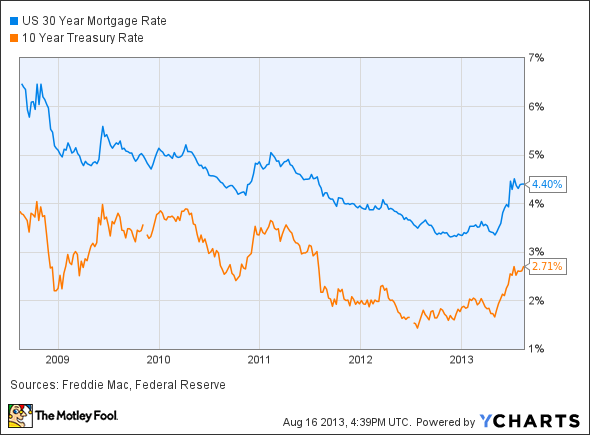 Since then there has been a lingering worry that higher rates could put a damper on the housing market's recovery. Today's reports show that so far this is not the case, at least when it comes to new building. Housing starts rose to a seasonally adjusted annual rate of 896,000 in July, up from 846,000 in June, though they fell short of analyst expectations of 915,000. Building permits, a sign of future housing starts, rose to a seasonally adjusted annual rate of 943,000. That's better than June's 918,000, though slightly worse than analyst expectations of 953,000. The big question that remains is whether the rise in mortgage rates will affect housing prices. Later next week we'll get more information, with June's FHFA home price index coming out on Thursday and July's new-home sales report coming out on Friday.

The last economic release was the productivity report, which showed that productivity rose at a 0.9% annual rate, reflecting a 2.6% rise in output and a 1.7% rise in hours worked. Low productivity gains are among the reasons growth has been sluggish coming out of the recession. Higher productivity would mean higher growth and higher employment -- both positives for the economy but perhaps negatives for the market, as they could prompt the tapering of the Federal Reserve's asset purchases.

So what's an investor to do in this Fed-dominated market? Long-term investors would do well to ignore the market's ups and downs, focus on their investing plans, and keep their wits about them. If the drop continues, opportunities will arise for long-term investors to pick up undervalued companies.

The Dow Is Down, but There's Good News for Investors @themotleyfool #stocks $^DJI $^GSPC Next Article
Current