There's been a lot of commentary lately on the Federal Reserve and the so-called "tapering" of its $85 billion-per-month bond-buying program. But what exactly is tapering? Why don't investors like it, and what does it mean to you and me? Let's cut through the market babble and get down to what tapering really is.

The Fed tries to boost growth
Coming out of the Great Recession, the Federal Reserve pulled virtually every lever available to boost the economy. One of those levers was to "print" money to buy mortgage-backed and other long-term securities in the open market -- a policy known as "quantitative easing." This would put more money in other investors' hands and lower long-term interest rates.

The aim of lowering long-term interest rates is to make it more affordable for people to buy homes and cheaper for companies to offer debt and in turn grow their businesses. A side effect is that stock and bond markets get giddy about the Fed buying everything in sight and push up asset prices.

The economy stands on its own
The inevitable end to quantitative easing means Bernanke & Co. will eventually have to slow bond purchases and let the market get back to normal. There's a lot of debate about when this should be done, but three factors the Fed considers are GDP growth, inflation, and unemployment. As you can see below, GDP and inflation have been steady for three years, while layoffs have now reached a level not seen since 2007. 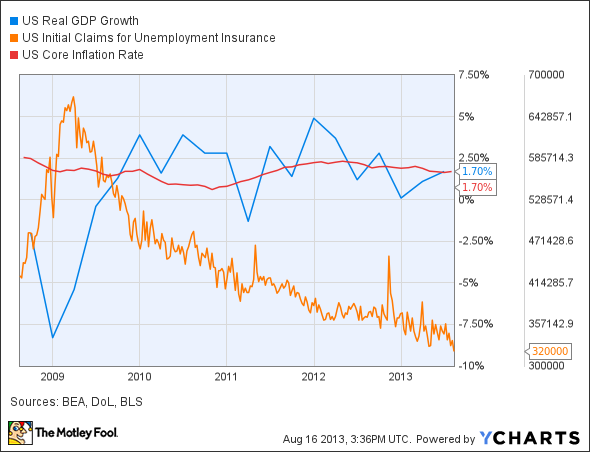 The economy may not have fully recovered yet, but if the Fed keeps stimulus in place too long, it risks creating the next bubble. So it will gradually take the crutches out from under the economy by slowing, or "tapering," long-term bond purchases, which will allow long-term interest rates to rise. But keep in mind that short-term rates will remain very low, so the Fed is keeping rates low enough to make sure the economy doesn't go into free fall overnight.

What it means to you
As the Fed slowly withdraws its support, how will you be affected? The first impact will be on mortgage rates, and that pain is already being felt. Rates have spiked more than 1% since the beginning of May, and they'll likely rise further once the Fed is no longer buying mortgage assets. 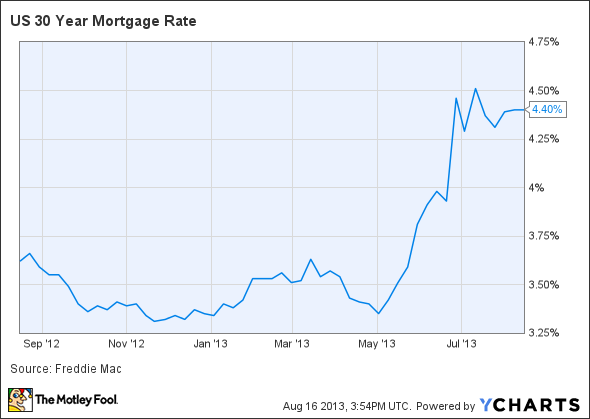 The other impact will be on the economy and the jobs market. There's fear that if quantitative easing is terminated too early, it could stop the recovery in its tracks and lead us back into a recession. If the Fed is right and the economy can stand on its own, there's no major worry that the jobs market will pull back, but if layoffs begin again it may have to rethink its position.

What it means to your investments
For stocks, quantitative easing is a bit of a conundrum. Traders will tell you that it will suck the air out of the market and stocks will fall if the Fed begins tapering. But long-term investors should keep in mind that the Fed will only taper quantitative easing if the economy can stand on its own.

It's also important to keep in mind that most companies on the Dow Jones Industrial Average (DJINDICES:^DJI) and even the broader S&P 500 (SNPINDEX:^GSPC) have spent the past three years improving their balance sheets. According to the St. Louis Fed, corporate cash levels are now up to $1.78 trillion -- the most on record. Higher interest rates on borrowing money may have some impact on businesses, but GDP growth and consumer confidence will have more. Tapering is by no means an end to the growth in corporate profits or the stock market's gains in the long term.

Foolish bottom line
Tapering is going to happen; it's just a matter of when. The financial media is making a big deal about it because it's a hot topic, and traders will use it as a reason for short-term moves. But it's actually a sign of strength in the economy, and that's what will help drive stocks higher in the future.