U.S. stocks fell for a fourth straight day today, with the S&P 500 (SNPINDEX:^GSPC) down 0.4%, while the narrower, price-weighted Dow Jones Industrial Average (DJINDICES:^DJI) lost 0.3%. That constitutes the longest losing streak of the year for both indices; however, investors need not interpret this "first" ominously -- the fact that we had not seen a four-day losing streak before now is what strikes me as unusual (and characteristic of the tremendous "liquidity rally" we've witnessed this year).

Still, today's losses were enough to lift the CBOE Volatility Index (VIX) (VOLATILITYINDICES:^VIX), Wall Street's "fear index," 5.1% to close above 15. After bottoming out at 11.84 on Aug. 5, the VIX is finally returning to more reasonable levels. (The VIX is calculated from S&P 500 option prices and reflects investor expectations for stock market volatility over the coming 30 days.)

More headline risk for JPMorgan Chase
"Regulatory Headaches Worsen for J.P. Morgan," announced The Wall Street Journal on its website in an article that ran in this morning's print edition. Indeed, as the article points out, JPMorgan Chase (NYSE:JPM) looks set to steal the top spot from rival Bank of America (NYSE:BAC) in a rather unenviable category:

A growing number of lawsuits and investigations could force the nation's largest bank to absorb $6.8 billion in future legal losses above its existing reserves, according to a filing earlier this month. That amount is greater than any other U.S. bank, according to an analysis from Barclays Research, a unit of Barclays PLC.

The numbers put J.P. Morgan on pace to supplant Bank of America Corp. as the big lender with the most legal problems. Since early 2010, only Charlotte, N.C.-based Bank of America has paid out more in legal costs and settlements, according to Barclays' analysis.

J.P. Morgan faces six separate investigations from the U.S. Justice Department, according to the filing, three of which hadn't previously been disclosed.

Regulators are certainly showing some zeal, with the SEC now investigating the bank's hiring practices in Hong Kong, out of concern that it may be buying influence by bringing on the sons and daughters of high-ranking Chinese officials. Needless to say, the Chinese authorities aren't pursuing this matter themselves; I believe they have a term for such practices that roughly translates to "business as usual," as this type of hiring has been a key tactic of every investment bank that wants to make a go of its operations in China.

None of this has kept JPMorgan shares from outperforming the S&P 500 index this year: 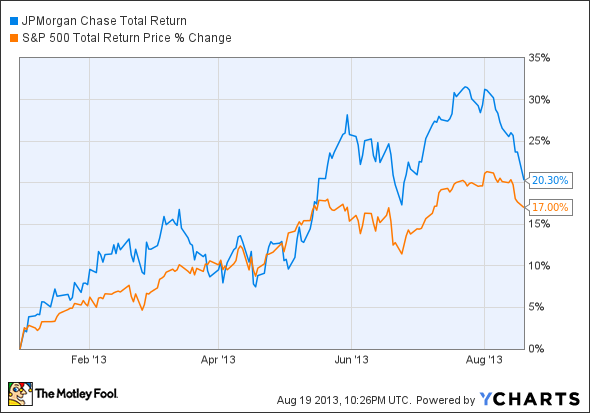 In fact, the bank's stock has beaten the index over the past years with a total return of 56% against 44%. That's now in the past, however; will these legal issues prevent the stock from outperforming from here on out? I think not -- or not over any reasonable time horizon, in any case. At less than 9 times estimated earnings per share for the next 12 months and only a 32% premium to their tangible book value, the shares are cheap enough to more than make up for the legal risk the bank face. The same goes for Bank of America's shares, by the way, and they feature an additional catalyst, in that the bank has yet to return to a "normal" dividend payout level.