In the late 1960s, a junior professor at NYU, Edward Altman, published a formula that would change finance: the Altman Z-score. Altman researched nearly 70 bankrupt manufacturing companies' financial statements pre-bankruptcy to determine what these companies had in common. This research gave rise to an easy-to-use equation that could predict bankruptcy.

Altman's Z-score has since been modified to address sector specificity and accounting changes, but the original version is still utilized by investors, professors, and business students alike to predict a company's chance of default. Considering that a bankruptcy is tremendously destructive to value, it is imperative to factor this scenario into your forward-looking analysis.

With BlackBerry's (NYSE:BB) admission that it needs help by forming a strategic committee to "explore strategic alternatives to enhance value and increase scale in order to accelerate BlackBerry 10 deployment," it's a good time to visit its Z-score.

What's in a Z-score?
The Altman Z-score uses income statement and balance sheet line items in the following equation: 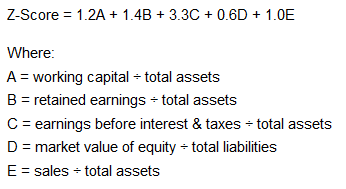 Below are the unweighted calculations of each category and the final weighted Z-score for the last 12 months, 2013, and 2012.

While no formula is perfect, Altman's original work predicted bankruptcy roughly 80%-90% of the time. You can see that BlackBerry has entered the "gray area." However, the trend should be a reason for concern. Falling sales and EBIT have led to a Z-score ~30% lower than 2012. What's bruising BlackBerry?
Techies are a fickle bunch. What is cool and "in" one year, quickly fades with new entrants, updates, and iterations. BlackBerry never quite caught on to this fact. Anecdotally, it was more concerned with a full-sized keyboard than developing a robust suite of apps to bolster its ecosystem. Its myopic focus on hardware and handsets allowed competitors like Apple (NASDAQ:AAPL) and Google (NASDAQ:GOOGL) to create or partner with handset creators to produce stronger, more durable ecosystems. As a matter of fact, Apple recorded more revenue from its iTunes/software/services category (4.0 billion) than BlackBerry did in total (3.0 billion) last quarter. Google took a different approach in developing its ecosystem. It decided to partner with handset makers through its Android OS to bolster search in the mobile market -- and it worked. According to comScore, Google's percentage of search was 67% in July, and an eye-opening report from Business Insider Intelligence pegged Google's mobile search market share at 97% in May 2012. Both competitors have established strong moats that may be fatal to BlackBerry.

Where does BlackBerry go from here?
The outlook looks bleak for BlackBerry as it fights back from an awful year where revenues dropped 40% from the previous year. The long-awaited "BlackBerry Saviors," the Z10 and Q10, hit the market with a proverbial thud after delays and missteps. And while many think the company is trading at a "cheap" price-to-book and price-to-tangible book value, that is predicated on a corporate turnaround and return to profitability. Management's strategic committee is a signal that that will not happen soon. Going private, making an acquisition, and participating in a merger are always options. However, "event investing" is an inherently risky proposition. Investors should continue to monitor this company for signs of progress, but stay away from it in the interim.