The "death of the PC" is a cliche that you hear all too often these days, and with its large exposure to the PC market, semiconductor giant Intel (NASDAQ:INTC) has seen its revenue and profit drop on a year-on-year basis. One sign of Intel's recent struggles is the company's recent dividend announcement, when Intel kept its dividend on hold despite wide expectations of a dividend hike.

You only have to look at Intel's dividend history to see why investors were expecting a bump in the quarterly dividend. Intel has a rich history of dividend increases: The tech giant increased its quarterly dividend from $0.14 per share in fourth-quarter 2009 to $0.225 per share in the third quarter of 2013, an increase of more than 60% over 11 quarters. During the past decade, the only time that Intel did not raise its dividend at least once every four quarters was during the great recession of 2008-2009 when it kept its quarterly payout on hold at $0.14 per share for seven quarters.

Although many investors were expecting a dividend hike based on Intel's dividend history, Intel's decision makes sense when you look at the company's recent earnings results and the management's previous comments about its target payout ratio.

Intel's latest earnings results show that the company is facing the consequences of ignoring the trend-shift toward mobile computing for too long. In its second-quarter results, Intel reported an EPS of $0.39, down 28% year-on-year. The company's revenue came in at $12.8 billion, down 5% year-on-year. Thus, with falling revenue and profit, it would not have made sense for Intel to commit to increasing payouts to investors.

The importance of Intel's falling revenue and income to the company's dividend decision is accentuated when you look at the company's payout ratio. Intel already pays a larger proportion of its income as dividends as compared to many of its peers. In the past 12 months, Intel earned $9.5 billion in net income and paid around $4.5 billion in dividends, resulting in a payout ratio of over 48%. Over the same period, chip maker Qualcomm had a payout ratio of 29%, while tech giants Microsoft (NASDAQ:MSFT) and Cisco Systems (NASDAQ:CSCO) had payout ratios of 34% and 29%, respectively. 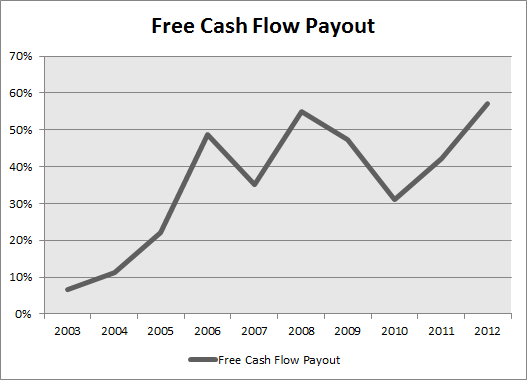 Assuming that Intel's FCF for the year 2013 remains the same as that in 2012, which is a generous assumption given that analysts expect the company's revenue and net income to fall, Intel's FCF payout ratio would still remain above the 50% mark despite the company keeping its dividend on hold. This is much higher than the management's stated target and shows why the company chose not to increase its dividend.

So what next for Intel?

Although Intel does not have much room to increase its dividend anytime soon, I believe that Intel's future is not as bleak as some of the bears might suggest.

Intel's leadership in the PC industry is already well established and will only be enhanced by the introduction of its latest processor, codenamed Haswell, which brings remarkable improvements in battery life and graphics performance over its predecessor.

Moreover, Intel claims that its latest chips designed for mobile that are based on the Silvermont architecture are superior to those designed by rival ARM Holdings in terms of power and performance, a claim that ARM vehemently rejects. Only time will tell who is right, but with Intel's renewed focus on developing mobile chips, I have no doubt that Intel can translate its huge advantages in manufacturing process and R&D to crush its competitors in mobile as well.

But I want dividend growth...

Despite my bullish view Intel's long-term prospects, there are some investors who might not wish to wait too long for their dividend hike. Such investors can look at Microsoft and Cisco Systems as alternative large-cap tech names that pay a healthy dividend.

Microsoft has a much lower payout ratio than Intel but the software giant is suffering from many of the same drawbacks as Intel as it vies to make the transition from the PC era into mobile computing. Nevertheless, with a relatively low payout ratio, a healthy yield of 2.9% and a five-year dividend growth rate of 22%, Microsoft is an attractive proposition for income oriented investors.

Investors who want to reduce their exposure to the PC names can look Cisco Systems as an alternative. Although Cisco only started paying its dividend from 2011, it has almost tripled its quarterly payouts from $0.06 per share in the first quarter of 2011 to $0.17 per share in the most recent quarter. This amounts to an annualized dividend yield of 2.8% at today's price. With a payout ratio of 29%, an extremely healthy cash position on its balance sheet and solid revenue growth, I expect Cisco to continue to increase its dividend on a consistent basis.

Many investors were disappointed that Intel did not raise its dividend with the recent announcement. However, keep in mind that Intel already offers one of the highest dividend yields on the market and its cash flow payout ratio is running well above the management's previously stated target.

For those investors who are looking to diversify away from PC exposure, I would recommend Cisco Systems as an alternative.