China, once considered the hottest growth market in the world, has had a rough year. Food safety problems, a new bird flu outbreak, stagnant wages, the rising cost of living, and bank liquidity problems have all contributed to the lackluster performance of Chinese stocks this year. Over the past twelve months, the SSE Composite in Shanghai has declined 2%, although the Hong Kong-based Hang Seng has risen 8%. However, both have woefully underperformed the S&P 500 in the U.S., which is still up 16%.

However, in any market there are still winners to follow and losers to avoid. Although the Chinese market can be a tricky one to navigate, there are still some promising growth sectors to consider.

The Chinese travel sector has been hit the worst by avian flu fears and rising fuel prices. Over the past six months, shares of China Eastern Airlines (NYSE:CEA) have fallen more than 26%. China Eastern Airlines flies passengers domestically and internationally, and also offers cargo and mail delivery services.

In 2012, China Eastern's profit dropped 29.8% year-over-year, a precipitous drop that was slightly better than the 48.2% decline that China Southern Airlines (NYSE:ZNH), experienced, and the 33.8% drop that Air China reported.

Together, China Eastern Airlines, China Southern Airlines and Air China are considered the "big three" airlines in China, controlling 80% of the market between them. The three companies are also heavily funded by the Chinese government, receiving $650 million in state subsidies in 2012.

All three airlines have reported bottom line declines for three consecutive years, after reporting strong earnings growth in 2010. 2013 hasn't been much better--year to date, China Eastern's revenue has edged up 1.9%, but its earnings have fallen 14.8%. 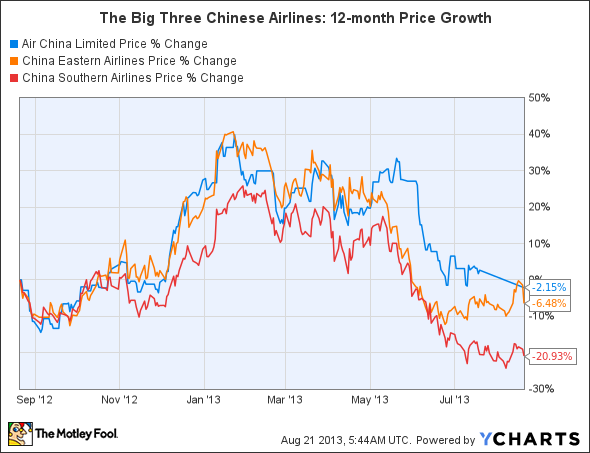 Customer satisfaction with Chinese airlines is also at an all-time low. According to FlightStats, only 18% of flights from Beijing's Capital International Airport are taking off on time. Protests and violent incidents have occurred across the country as a result of the travel delays. According to the Chinese media, the problem has become so severe that several airports have stopped announcing delays over the PA system altogether to avoid antagonizing travelers.

Although the numbers behind those crowds -- 296 million domestic passengers in 2012, an 8.8% year-over-year increase -- should generate healthy revenue growth for airlines, the competition between the three airlines causes some major markdowns in ticket prices and some slim margins. China Eastern Airlines and China Southern Airlines only reported profit margins of 2.9% and 2.4%, respectively, which led to lackluster profit growth. Air China fared slightly better, with a profit margin of 4.7%.

Although Chinese airlines have performed terribly, shares of Ctrip.com (NASDAQ:TCOM), the country's largest online travel agency, have surged 130% over the past six months, handily outperforming its closest competitor, eLong (NASDAQ: LONG), which has only gained 1.5% over the same period. 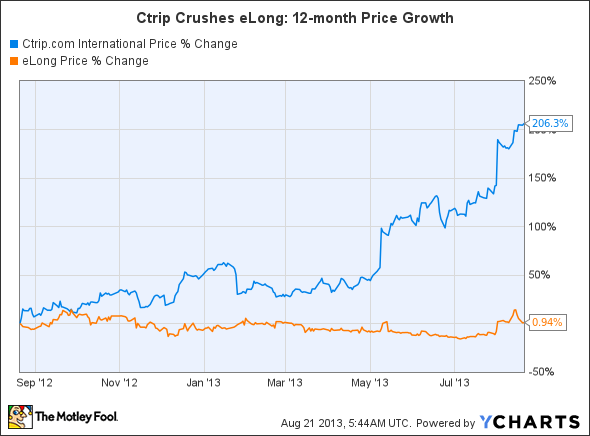 In the second quarter, Ctrip's net income rose 76% year-over-year to $34 million, as its revenue rose 28% to $203 million. eLong, by comparison, reported a 27% year-over-year rise in revenue last quarter, but it reported a net loss of $12.43 million, compared to a profit of $2.6 million a year earlier.

Ctrip and eLong have been locked in a costly pricing war over the past three years. eLong started introducing cash rebates for hotel bookings in 2010, sacrificing its margins and profits to reduce Ctrip's market share. eLong's started to claim so many hotel bookings that Ctrip was forced to counter eLong with rebates of its own. Both companies started to give cash rebates for airline tickets as well.

Last quarter, Ctrip's hotel reservation volume rose 44%, compared to eLong's 58% gain. Revenues from hotel reservations rose 25% at Ctrip and 29% at eLong. However, Ctrip's profit margin came in at a healthy 15.2% compared to eLong's -11.8%, indicating that the only real victim in eLong's persistent pricing war has been itself. Going forward, eLong will have a tough time continuing its pricing war, which should result in Ctrip regaining market share over the next few quarters.

E-commerce is still cruising along

Both Ctrip and eLong have benefited from the rising rate of Internet penetration in China, which is projected to jump to 52.7% by the end of 2013. Considering that the United States has an 81% penetration rate, Chinese Internet companies like Baidu, Qihoo 360 and Sina still have substantial room to grow.

However, the hottest Internet market right now is e-commerce, which is currently dominated by Alibaba (NASDAQOTH: ALBCF), which owns Taobao and T-Mall, two of the largest e-commerce sites in China. Taobao is a consumer-to-consumer site that dominates 95% of the market, and T-Mall is a business-to-consumer site that controls 44%. Alibaba's total annual sales are higher than eBay's and Amazon's combined. Last quarter, Alibaba's earnings soared 189% as its revenue climbed 71% from the previous year.

Although shares of Alibaba are only available in the OTC markets to American investors, two other publicly traded Chinese e-commerce companies -- E-Commerce China Dangdang and Vipshop Holdings -- have respectively risen 70% and 670% over the past twelve months. I discussed both companies, which I consider bullish underdogs, at length in a previous article.

China is still a lucrative growth market for investors who know how to look beyond Baidu. Investors should avoid the Chinese airline stocks, which are vulnerable to higher fuel prices, but stick with travel agencies like Ctrip, which benefit from hotel, airline and package bookings. Meanwhile, e-commerce is still the key market to watch, as China's increasingly-connected, growing middle class spends more money online.

Although China's growth slowed down substantially after the Beijing Olympics in 2008 and the Shanghai World Expo in 2010, the country still has favorable investment opportunities for patient, long-term investors.