When a company's business increasingly depends on uncontrollable factors such as weather, sustaining top and bottom-line growth becomes a real challenge. Yet investors, who pay little heed to the business environment, may still expect good returns from such a company. In such situations, diligent capital allocation can help a company keep attracting investors. Fertilizer maker Agrium (NYSE: AGU) seems to understand this well.

Investors might have complained about Agrium's lackluster dividends over the years, but between its recent dividend increases and its ongoing buyback program in place, Agrium has plugged the gap -- and perhaps given its long-term investors a great reason to keep their faith in its management.

Why Agrium's growth is your growth
Over the past few years, Agrium devoted its attention to capital growth opportunities, with a greater focus on new and high-growth markets. The 26% stake it bought in MOPCO in 2009 strengthened Agrium's foothold in Egypt. Acquiring AWB Limited in 2010 gave Agrium major headway into the Asia-Pacific market. And Agrium has continued buying out retail outlets in Argentina and other regions of the world in recent years. More recently, after taking over Viterra's agri-products retail facilities in Australia last month, Agrium is now preparing to acquire 90% of Viterra's Canadian retail business.

Clearly, Agrium is an acquisitive company, having invested a major chunk of its surplus cash to expand its reach. But have Agrium's ambitious moves generated returns for its shareholders? Look at the growth in Agrium's key operational and performance metrics between 2009 and 2012.

Source: Agrium 2012 Annual Report. All dollar figures in millions, except EPS and ROE,

The exponential growth in Agrium's earnings per share and return on equity since 2009 proves the company's growth strategy successful. Not surprisingly, Agrium's shares not only outperformed the S&P 500 during the four-year period but also fetched much better returns than PotashCorp and Mosaic. 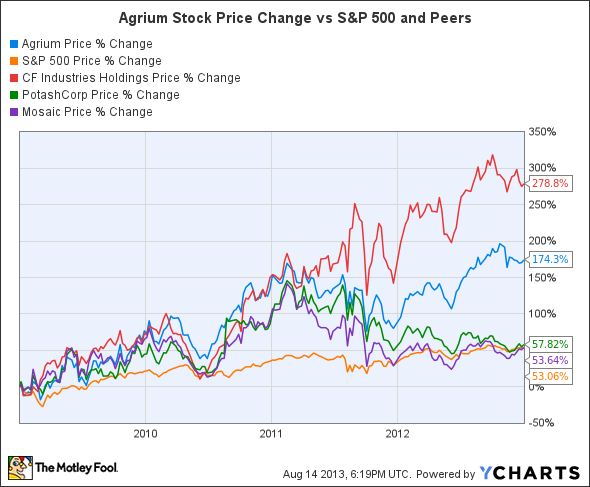 CF Industries' (NYSE:CF) exceptional rise can be attributed to the quadrupling of its EPS between 2009 and 2012, as well as a handsome ROE of 35%. But CF pales in comparison with Agrium when it comes to dividends. You might want to applaud the 300% rise in CF's annual dividend per share since 2009, but wait till you hear about Agrium's generosity.

The gigantic dividends no one expected
Agrium kept its annual dividend steady at $0.11 per share for several years until 2011, when the company realized that it was high time to reward its shareholders. A significant rise in profits, thanks to strong business conditions, encouraged Agrium to double its dividend.

But that initial hike was just the beginning. Agrium is now emptying its coffers with a $2 annual dividend per share. That works out to a staggering 1,700% dividend growth in two years. Agrium's stock now yields a decent 2.3%, in line with Mosaic's yield, but several notches above CF's puny 0.8%. PotashCorp tops the list with a juicy dividend yield of 4.7%.

Agrium never advocated share buybacks. Only last August did the company announce a repurchase program worth $900 million, to be funded with the proceeds of the sale of its interest in a nitrogen facility to CF Industries. A double bonanza awaited investors, as Agrium kicked off yet another program in the last quarter to buy back 5.5% of its outstanding shares through May 2014. Agrium has already lapped up 9 million shares over the past year, and another 5 million could be up for grabs.

Why your pockets could get heavier
One thing is clear: Agrium's management considers buybacks as a last resort, suitable only when the company can't find other investment opportunities. I like the strategy.

Increasing uncertainties and oversupply fears in the fertilizer industry recently prompted Agrium to put two of its potential nitrogen projects on hold. With capital expenditures getting smaller, Agrium will have to rethink what it can do with its cash flows. For investors, it's a win-win situation, because dividends and buybacks will probably occupy Agrium's mind in the coming years. While dividends mean quick cash in investors' hands, buybacks push up EPS and give existing investors a greater share of the business.

I find Agrium's capital allocation policies well balanced, and I think investors can expect a lot more in the years to come. This should give you reason enough to seriously consider Agrium's stock, especially if the recent shake-out in the fertilizer industry has left you worried.