Wal-Mart (NYSE:WMT) and Target (NYSE:TGT) have both reported earnings in the last week, and in both cases, investors didn't particularly like what they had to say. While adjusted EPS met expectations in both cases, Wal-Mart and Target both missed sales estimates and reduced full-year guidance. Both stocks have pulled back accordingly. 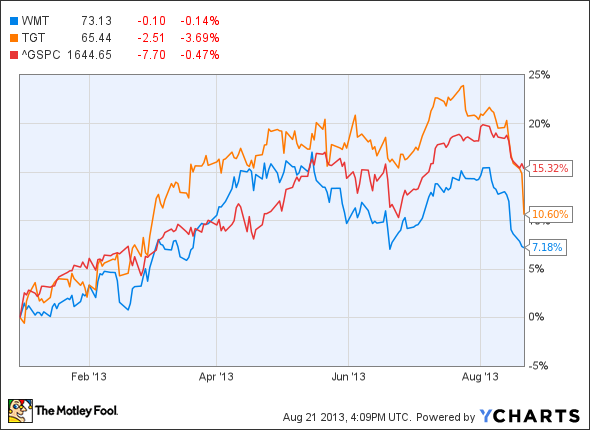 For much of 2013, Wal-Mart and Target were outperforming the S&P 500, despite posting mediocre results. However, after this second wave of disappointment, both stocks are now underperforming the market year to date. Investors are finally acknowledging that these companies' poor recent results are more than just a blip on the radar.

As large discount retailers, Wal-Mart and Target are heavily reliant on the American consumer's health to keep sales and earnings growing. Higher payroll taxes and lower government spending are both offsetting gradual economic expansion and cutting into disposable income for many Americans. Furthermore, many consumers appear to be putting their money toward replacing older cars and trucks rather than other discretionary spending. As a result, Wal-Mart and Target probably have more room to fall before becoming attractive to value investors.

Results in brief
Last week, Wal-Mart reported a slight year-over-year increase in earnings, but same-store sales declined again in its Walmart U.S. division. This led the company to cut its full-year EPS guidance by $0.10, from a $5.20-$5.40 range to a $5.10-$5.30 range. Wal-Mart also slashed its sales growth forecast by half.

Target reported equally disappointing results this Wednesday. Same-store sales in the U.S. increased just 1.2%, while losses related to the beginning of operations in Canada caused GAAP EPS to decline by more than 10% to $0.95. Moreover, Target nearly doubled its estimate of losses related to its Canadian expansion, and stated that non-GAAP EPS -- which excludes losses in Canada -- will be near the bottom of its May forecast range of $4.70-$4.90. (Target's May guidance was in turn lower than its initial adjusted EPS guidance range of $4.85-$5.05.)

Challenging environment for growth
Executives at both companies blamed the weak macroeconomic environment for their struggles. While Wal-Mart still talks about growth as a goal, same-store sales fell for the second straight quarter and management does not expect growth next quarter, either. The company is still expanding by adding new stores -- especially smaller-format "Neighborhood Market" and "Express" stores. However, Wal-Mart's footprint is so big that these store openings cannot move the needle. Year to date, Walmart U.S. sales have grown just over 1%.

Target is also seeing glacial growth in its U.S. business, where sales have increased just 1.4% this year. On the other hand, Target is much smaller than Wal-Mart and therefore should have a more significant long-term growth opportunity.

Its ongoing foray into Canada is driving significant sales growth, and should continue to do so for the foreseeable future. However, the Canadian business will post a big loss this year, and CEO Gregg Steinhafel admitted that the Canadian division is unlikely to earn a profit next year, either. Strong initial sales trends in Canada did not hold up, which explains these reduced expectations.

Steinhafel did say that he still expects the Canadian business to add $0.80 to EPS by 2017. If this occurs, the initial investment will have been worthwhile. However, this is Target's first expansion outside the U.S., and investors should recognize that this entails more risk than simply opening more stores within the U.S. In short, Target will grow faster than Wal-Mart, but there is a significant chance that this will not produce the profit growth management expects.

Foolish bottom line
Wal-Mart and Target are both solid businesses that reliably produce significant cash flow and have strong market positions. However, neither company is growing very quickly anymore, and neither stock is particularly cheap. With both companies reporting relatively downbeat earnings and guidance yet again, neither stock seems particularly attractive, particularly considering the other good investment opportunities in retail.