With the refinancing boom waning as interest rates rise, Wells Fargo (NYSE:WFC) recently announced that it will cut 2,300 jobs in its mortgage unit, even though it saw its mortgage originations rise 3% from the first quarter to the second quarter this year. What will this trend of cutting jobs despite rising issuance mean for investors, and why did Wells Fargo make such a move?

As The Wall Street Journal reported, "A spokesman for the San Francisco bank said the job cuts will affect employees across the country, as the mortgage-refinancing slowdown continues to hit the volume of loans being made."

Yet with last quarter's industrywide mortgage issuance rising 8% year over year, the following banks led the way in mortgage origination:

Quicken Loans, a private company, also came in strong with $23.8 billion in mortgage originations. It's important to note that Wells Fargo comes in on top among all commercial banks and had more mortgage original volume than the four other banks combined ($112.0 vs. $110.8).

With that in mind, let's check on those banks to see how their mortgage origination has trended over the past year relative to second-quarter 2012 levels, and determine what this potential slowdown (or lack thereof) could mean to investors. 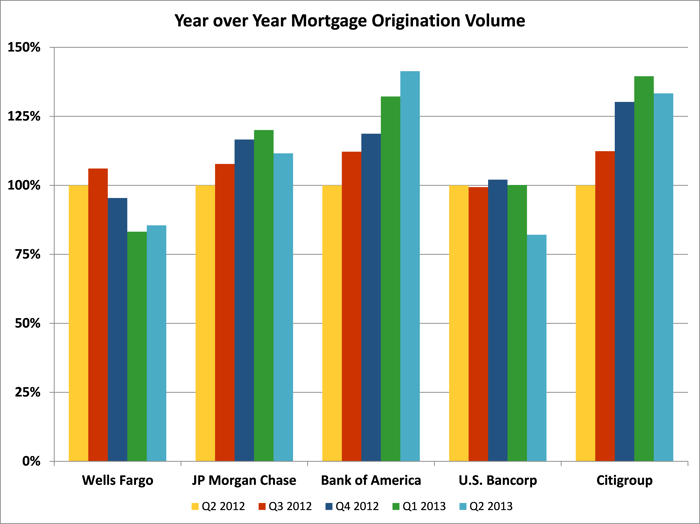 Following years of headaches related to its acquisition of much-maligned Countrywide and scaling back mortgage lending, Bank of America leads the way in mortgage origination growth, at 41% year over year. Citigroup, another bank known for its missteps, has had its mortgage originations climb 33% in the same period. Yet Wells Fargo and US Bancorp, often cited as the darlings of the financial-services industry, have seen their originations fall 15% and 18%, respectively, as competition has heated up.

Mortgage originations were $112 billion, our seventh consecutive quarter of more than $100 billion in originations, reflecting the benefit of the housing market improvement and low interest rates.

If Wells Fargo believed that, then why all of the job cuts? And which company's truly making the appropriate move here?

The big picture
During the past two quarters, we saw average mortgage rates rise from 3.36% to 3.69%. Even more troubling, the pace at which rates are rising sped up in July, and rates have since jumped to more than 4.50%. Yet surprisingly, the Mortgage Bankers Association projects originations for home purchases to rise in the coming quarters: 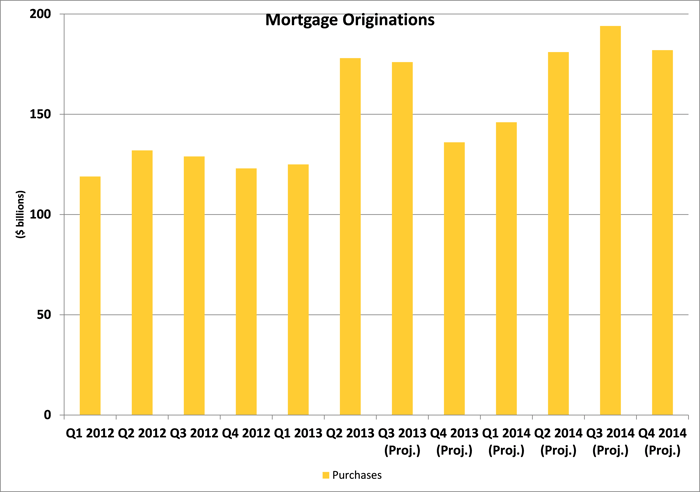 Since the recent data suggests we may not be following the historical trend in which mortgage applications fall when rates rise, is Wells Fargo is making the wrong decision by consolidating its mortgage business? The answer to this question lies in the refinancing data and projections: 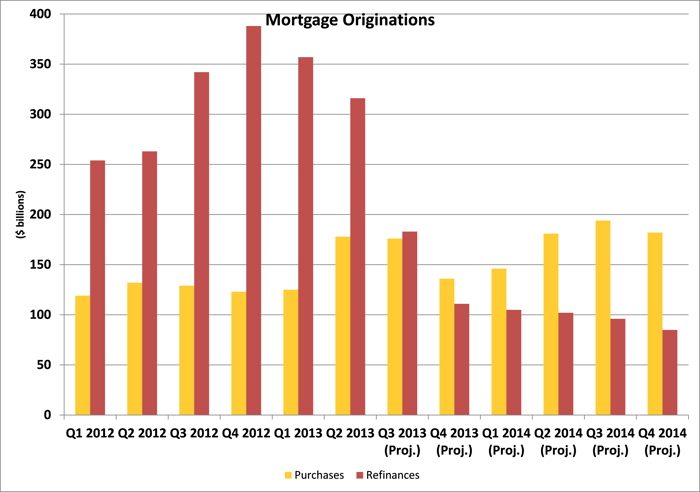 Here, we see a dramatic drop-off in refinancing that's expected as the rates rise. And with that in mind, let's look at the types of mortgages Wells Fargo has been producing: 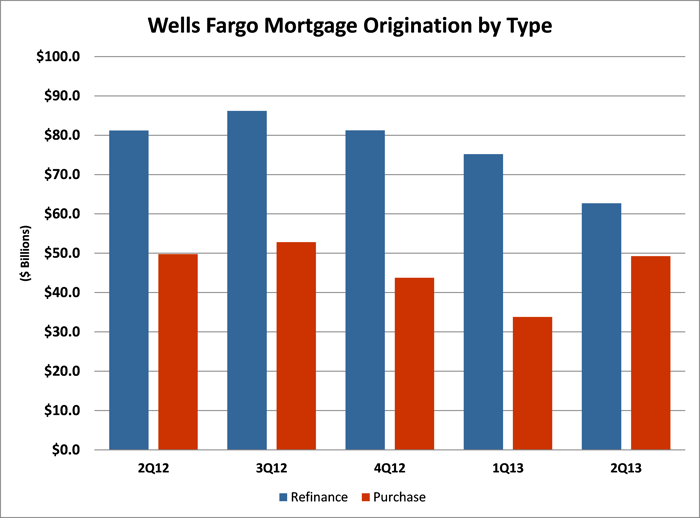 As you can see, while its new mortgages have been relatively stable -- and actually saw a sharp increase in the last quarter -- its refinancing volume has declined dramatically, following the trend seen across the industry.

Since both the housing market and interest rates are bouncing back from incredible lows, home purchase volume and housing starts could potentially continue to increase in spite of rising rates. But the decline in refinancing will nonetheless take its toll on banks.

However, Wells Fargo isn't the only mortgage lender anticipating a drop-off in overall activity. Bank of America indicated that 83% of its origination volume in the second quarter was a result of refinancing, and US Bancorp indicated that its share of refinancing fell from 71% in Q1 to 59% in Q2.

By cutting these jobs and the associated expense, Wells Fargo again seems to be ahead of the curve. It understands that its pipeline of refinancing is likely to come to an abrupt halt, and it's adjusting accordingly. While the loss of jobs is disheartening, Wells Fargo investors should applaud the bank's efforts to maintain profitability.