When the economy tanks, people look to cut back wherever possible, whether it's no longer eating out, no more movie-theater visits, or no more visits to the department stores. But people still need clothes and home goods; enter the off-price retailer.

The likes of TJX (NYSE:TJX) and Ross Stores (NASDAQ:ROST) have been rewarded nicely over the past five years, with each stock up over 200% compared to the S&P 500's 25%. In this $98 billion industry , TJX is the powerhouse, operating both TJ Maxx and Marshalls stores. TJX also has the HomeGoods brand.

The fact is that these stocks have outperformed some of the major department stores, such as Macy's and Nordstrom.  The question is, can this trend continue as the economy strengthens? Or will consumers start trading up from the off-price retailers?

Ross was also recently out with earnings, posting better-than-expected EPS and comp-store sales that were up 4%. Ross saw  EPS up 21% year-over-year. The other benefit to the industry is that July retail sales came in better than expected. Both off-price retailers will be looking to their loyalty programs to help retain the customers they attracted during the customer trade-down period.

Many consumers, myself included, like to throw Kohl's (NYSE:KSS) into the off-price retail dogfight. While it might be true that Kohl's is more of a department-store retailer than an off-price retailer, many customers pit the three against each other when making shopping decisions. It's only fair to do the same when making investment decisions.

As a stock analyst, one of the best ways to get a feel for companies is to get in touch with their customers. This is especially true in retail. Below is a Yelp review, which does a superb job of summing up the three businesses.

Kohl's prices are out of control these days.... Ross is a mess inside, but you can find some good stuff in there. Marshalls and TJ Maxx are basically the same place. I go to them for everything from clothes to linens to luggage to iPhone accessories.

It was famed investor Peter Lynch who made the "invest in what you know" strategy popular. One story goes, Lynch bought Hanes in the 70's because his wife loved the L'Eggs pantyhose product. Thus, we turn to our friend the Internet to find yet another succinct and well-informed opinion on our three retail giants:

Marshalls (and TJ Maxx) - has high-end products with great prices. The selection is incredible, depending on when you go. I try to go on truck day.

Kohl's-pretty much just overpriced, lower quality merchandise. I do buy quite a bit from Kohl's online, but usually only clearance stuff with a coupon code and free shipping.

Ross - [its] selection is never very good and the shelves are always empty. I do check there, but never end up buying much.

I've personally been in each of the stores and can say that as a guy, shopping isn't my thing but I am drawn more to TJ Maxx. Now you never want to invest in something just because it's a great product or place, so let's see how the valuation stacks up.

A quick look at the valuation shows that TJX is trading a bit more expensively than Ross on both a price-to-earnings and price-to-book basis. Over the last decade, on average, Ross has traded at a 0.6 premium to TJX on a P/E basis, but currently Ross is trading with a P/E that's 1.8 points below  TJX :

So why does TJX trade at a premium now? It appears this off-price retailer is operating much more efficiently than its smaller counterpart. TJX has a return on equity of 54% compared to Ross' 46%. What's more is that TJX's inventory turnover is nearly 6.0x while Ross  is at 5.6x. In 2Q, TJX's sales jumped 8.6% year-over-year but inventory was up only 6% -- all big positives for TJX.

And what about Kohl's, you may ask? Kohl's, oh Kohl's, where to start. Well, the company has grossly under-performed the leading off-price retailers. When you think about how these three companies have traded over the past half-decade, it's really day and night. You have both Ross and TJX up over 200%, while Kohl's is up a mere 7%. 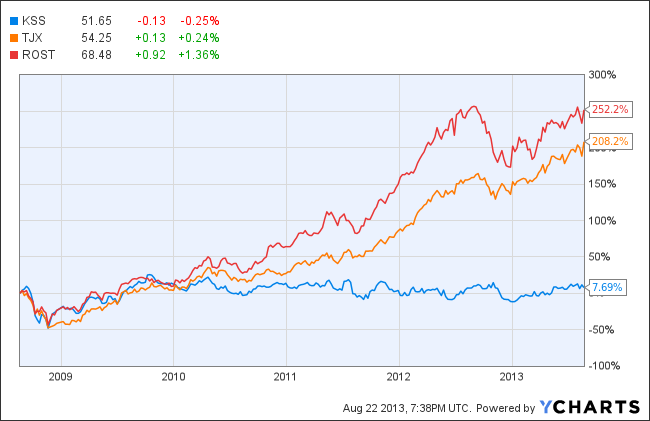 Kohl's, which came out with earnings  in mid-August, was not as fortunate as TJX and Ross. While earnings were up slightly year-over-year, comp-store sales were up only 0.9%.

If you dig a bit deeper, there is more bad news for Kohl's. The retailer appears to have a problem  with inventory. This stems from its inability to draw customers into its stores for the holiday, leading to inventory pile-ups. Inventory was up over 16% year- over-year at the end of fiscal 2012, and the problem only appears to be exacerbating. Inventory was up 10.3% in 2Q year-over-year, while sales were up only 2%. What's more is that Kohl's inventory turnover is 5x, compared to both Ross and TJX, which are above 5.5x.

Most investors refer to the shopping experience at off-price retailers as a "treasure hunt." Figuring out which one to invest in is not quite the same.

Ross' future growth lies with its store expansion. The company has room to grow before even coming close to TJX. Ross has 28 million square feet of retail space, compared to TJX's 70 million at the end of 2012. Ross has nearly 1,100 stores across 33 states, but hopes to boost that number to 2,000 over the long term . For fiscal 2013, Ross opened just over 60 Ross Dress for Less stores, and entered three new states.

But one of the beauties of TJX, compared to Ross, is that it already has a broad geographical profile. The company has stores spread across North America and Europe. It also has a stronger product diversification portfolio, thanks to its home goods stores.

It sounds counter intuitive, but the slow recovery will be a positive for the off-price retailers, giving them a chance to further build up a loyal following. The Economist Intelligence Unit believes that the U.S. GDP growth will be the slowest since 2010, coming in at 1.6% for the full year compared to 2.8% in 2012, 1.8% in 2011, and 2.5% in 2010.

As far as the best way to play off-price retail? I tend to like TJX from a growth standpoint and customers agree. TJX's premium valuation is justified and sales per square foot were up to $370 for TJX in fiscal 2012 compared to Ross'  $350 . Until Kohl's shows strength in new sales practices, I'll be holding off on this retailer.