Phillip Woolgar
(PhiWoo)
Author Bio
Phillip Woolgar bought his first stocks in 2007, and hasn't been able to take his eyes off the stock market since. He is a former newspaper editor who now earns a large portion of his living through the stock market. He credits The Motley Fool investment strategy with providing him with the know-how to live a leisurely lifestyle.

Like so many companies in the consumer goods sector, fashion retailers are attempting to develop international platforms to acquire revenue from emerging markets. This has already proven fruitful for many of the early entrants, and now other firms are attempting to join the party in countries such as China, India, Brazil and Russia.

Ralph Lauren is one of the leaders in international expansion

Like many other companies in the consumer goods market, Ralph Lauren (NYSE:RL) is making a bid for global expansion. While precise figures about sales in its new Hong Kong men's luxury clothing store weren't available, investors should watch for an idea of how sales are proceeding. A successful first few years will be a major indicator of the company's ability to profit from the developing world.

According to Morningstar, the company has also invested a considerable amount of money during the economic downturn. This will prove valuable in the years ahead as it gives Ralph Lauren a solid foundation on which to grow. With a slew of new opportunities opening up overseas, Ralph Lauren has already established a platform that many businesses are now just attempting to assemble.

Its proactive strategy to acquire direct distribution control in markets such as South Korea and Japan, which are notorious for their desire to keep up with fashion trends, will secure additional footing for bountiful profits. Efforts like these have increased revenue abroad at a faster pace than in North America, where the brand is closer to full saturation.

Columbia is reaching full saturation in the U.S.

Columbia Sportswear (NASDAQ:COLM) will need to expand globally if it wants to increase revenue. The firm has reached close to full saturation in the U.S., making international expansion almost a necessity if it wants to grow. However, predicting the profitability of world economies is a bit of a guessing game.

That makes the company's stock a wiser choice for long-term investors. I think developing nations will continue to prosper in the years ahead, but there could be some near-term grief before profits start rolling in. The company has built its brand to the point where it is highly touted and recognized throughout North America as providing some of the best sports and outerwear, and I think the quality will lead profits to echo in emerging markets.

As consumer spending continues to increase domestically (see chart below), the company's products will be carried by more retailers. 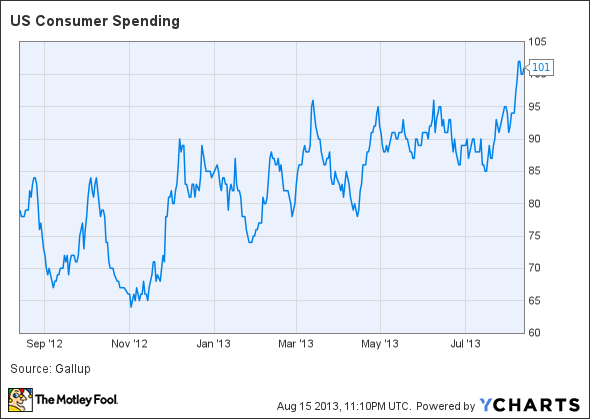 US Consumer Spending data by YCharts

Under Armour stretches into yoga

Under Armour (NYSE:UAA) is looking to capitalize on the estimated $6 billion yoga industry. This could be the source of tremendous profits for the company, as the industry has grown at a rate of about 20% per year since 2004. With yoga companies capitalizing on people having extra cash and free time, an economic recovery could mean an even faster annual growth of the market. Much of that potential revenue is overseas, and the company would benefit from expanding its operations into other popular yoga territories.

As the appeal of Under Armour in the athletic wear category improves, the firm will more consistently be sought out by retailers looking to lower their reliance on Nike (NYSE:NKE), which has consistently taken the top spot among performance sportswear brands. Under Armour has its work cut out for it to overcome a company that has strong customer loyalty like Nike does, however. Under Armour will need to match Nike's advertising budget if it wants to build its brand loyalty to a comparable level.

Nike is consistently developing new products that are attracting widespread appeal, and it will be difficult for Under Armour to match its development efforts. This is due to Nike's tremendous amount of free cash flow that it can invest (see chart below). 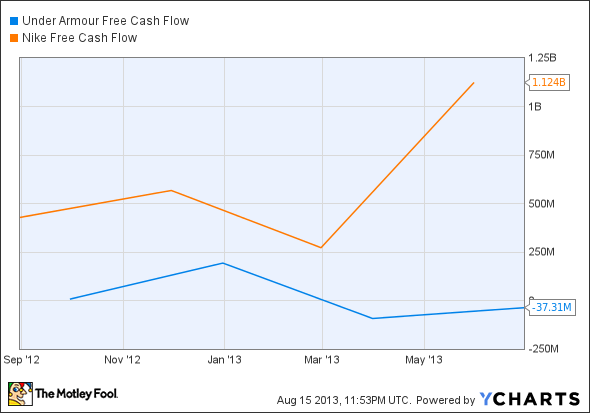 Invest in the internationally established firms

Investing in the developing world is not something short- or even medium-term investors should be doing. These economies are very unstable, but they do have massive long-term potential. It often takes many years before companies start turning a profit overseas, and this means that investors need to be patient. All of these firms offer an incredible amount of profit potential from emerging markets, but I believe that Ralph Lauren and Nike already have some footing that will allow them to capitalize when these markets begin to surge. Columbia and Under Armour are like a miniature windup car that is ready to take off, but they are less likely to turn profitable overseas in the near-term.