It's hard to believe today that shares of consumer electronics retailer Best Buy (NYSE:BBY) were headed toward single-digit territory less than a year ago. In a remarkably short time, Wall Street has gone from skeptical to enthusiastic with regard to Best Buy's turnaround strategy. As a result, Best Buy shares have more than tripled since bottoming out near $11 in late 2012. 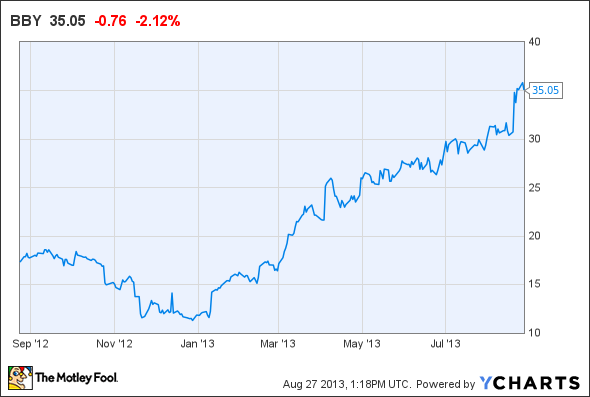 A prototype of the Samsung Experience Shop at Best Buy. Courtesy: Best Buy.

Nevertheless, Best Buy stock has run too far ahead of the company's fundamentals to be a worthy investment candidate today. Even though analysts do not expect significant earnings growth in the next year or two, its shares trade at roughly 15 times earnings. Moreover, the company still faces significant short- and long-term headwinds. As a result, Best Buy stock will probably underperform the market over the next several years.

Short-term headwinds ahead
While Best Buy easily beat earnings expectations when it reported Q2 results last week, it provided very cautious guidance. The company is investing in incremental SG&A costs in a bid to improve the customer experience and thereby gain market share. It is also continuing to cut prices, weighing on profitability. Outside of the core business, Best Buy will suffer from an increase in warranty costs and lower revenues from its private-label credit card beginning next quarter.

Management plans to offset these headwinds through improvements in the core business and cost cuts. However, Best Buy was already nearly halfway through its program to cut $725 million of annualized costs by the end of Q1. Despite those cuts, earnings growth in Q2 was much lower than the level of cost cuts. In other words, most of the cost cuts went to offset profitability pressures elsewhere in the business. With additional headwinds coming online next quarter, Best Buy could return to stagnant or even declining earnings.

It also faces one other potential headwind this fall. On the company's recent earnings call, Joly stated that the introduction of the Samsung Experience Shops has boosted sales of Samsung products. Best Buy benefited from the fact that the opening of these shops coincided closely with the release of Samsung's new top-of-the-line Galaxy S4 smartphone.

By contrast, the fall product cycle will probably belong to Apple. Apple is expected to release one or two new iPhone models in just two weeks, and redesigned iPads are probably not far behind. Apple products tend to offer lower margins than other brands, so a mix shift back to Apple product sales will hurt Best Buy's profitability. Moreover, since Apple has been comparatively de-emphasized in Best Buy stores, the company could see a sequential decline in mobile market share.

Long-term pressures remain
From a long-term perspective, Best Buy also faces significant pressure. While the company's price-matching policy will help cut down on "showrooming" behavior, Amazon.com remains a formidable competitor. Amazon has been rapidly growing its Prime membership base, and these customers can get free two-day shipping on virtually all of the products it carries. Many people prefer the convenience of ordering from home and receiving quick delivery over the "instant gratification" provided by physical retailers like Best Buy.

Even Wal-Mart remains a significant competitive threat. Wal-Mart has lower operating costs than Best Buy due to its scale. Best Buy seems to have gained market share from Wal-Mart in TVs and some other categories last quarter, but Wal-Mart's management is determined to fight back through even lower prices. Best Buy can continue to respond with its own price cuts and its price-matching policy, but while it may maintain its market share, profitability will suffer nonetheless.

Watch out!
Best Buy is in much better shape today than it was a year ago due to Joly's decisive turnaround plan. The company has dramatically improved its competitiveness in the past year by cutting prices and entering partnerships with Samsung and Microsoft. In the short term, Best Buy may also benefit from the fall release of next-generation video game consoles by Sony and Microsoft.

However, Best Buy also faces a raft of short- and long-term challenges. The company's new focus on price competitiveness has more or less stopped the cycle of declining revenue, but it has pressured its gross margin. Warranty costs and credit card revenues will also be headwinds over the next year. Longer term, brutal competition with discounters like Amazon, Wal-Mart, and Costco will make it hard to achieve significant margin expansion. As a result, Best Buy stock is probably due for a pullback.