A dividend history of less than two and a half years isn't much to hang your hat on, historically speaking. But Cisco has already shown some signs of nurturing a healthy dividend policy for the long term. Specifically, Cisco's payouts have grown like ragweeds since that first tentative payout. 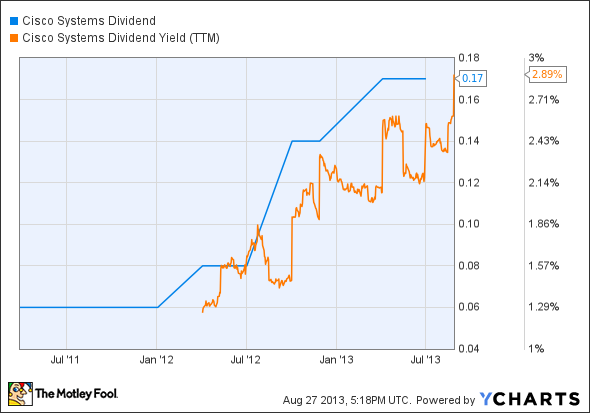 Cisco's dividends per share more than doubled in the first year and then doubled again a year later. That's an impressive commitment to stronger shareholder returns, and dividend payments now rival Cisco's generous share-buyback program in size. All things considered, the current 2.9% yield is comfortably above the Dow's 2.7% average yield. It's not a huge lead, but any advantage is impressive when you're comparing yourself to the market's elite group of companies.

That's a nice start, but Cisco's dividend story is not all wine and roses. The strong yield rests not only on generous payout policies, but also on a weak share price. In short, Cisco has been running in turnaround mode for the last several years, and you would have been better off owning a simple Dow-tracking fund throughout Cisco's dividend era. 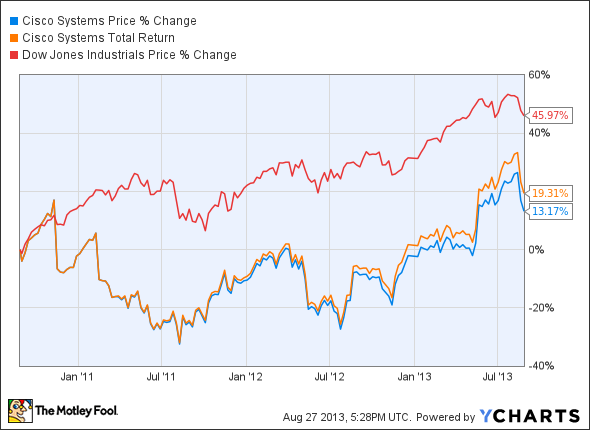 So the big question for income investors is: Will Cisco be able to pull itself up by the bootstraps and keep growing those quarterly checks?

The fundamentals are certainly strong enough. Cisco spends no more than 33% of its net income on dividend payments, and it spends an even smaller portion of its massive free cash flows. Sales are booming once again, driving strong GAAP and cash profits via a leaner, meaner operating model. 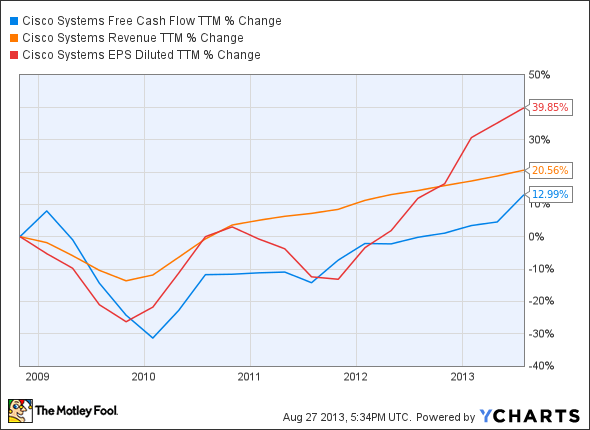 How about the core business model? There's no doubt that data networking will remain relevant for decades to come. The PC era may be grinding to a halt, but only because of the massive growth in mobile computing. Both platforms tap into high-bandwidth uses such as high-definition video streams, and network operators constantly struggle to keep up with the rising bandwidth demand. Oh, and the "Internet of Things" revolution is just getting started. Soon enough, most data traffic will go from one machine to another without a human consumer in sight.

All told, I'd be shocked if Cisco's hot start in dividend payments hit a brick wall anytime soon. The market is solid, Cisco's financial health is impeccable, and there's plenty of fiscal headroom for further dividend boosts -- even if the underlying business hits a snag or two along the way.

The only real threat to Cisco's dividend would be if today's smaller rivals managed to dethrone the networking king, stealing Cisco's commanding market share. It's a highly unlikely scenario, given Cisco's enormous research budget, but investors must consider every possibility. Short of an outright revolution in the networking space, Cisco sure looks like a solid dividend play.