Natural gas isn't just the newest trend in energy markets – it's the only trend. Companies are closing plants left and right to make a mad dash for natural gas – and their zeal could spell trouble for our nation's (and your portfolio's) energy diversity. Here's why.

Too cheap to fail
Oozing energy demand and booming natural gas supply have created cutthroat prices in the energy market – prices that are cutting out competition. "Out with the old and in with the new" is usually a good mantra when it comes to energies (anyone out there want whale blubber candles?), but our sluggish economy has caused utilities to shed other power sources at an alarmingly fast rate.

Entergy (NYSE:ETR) announced that it is closing a 1,900 MWt Vermont nuclear plant due in part to shale gas' role in keeping wholesale energy prices at rock-bottom levels. The company was already expecting to barely break even this year and incur losses in years to come on the plant, so the $240 million hit seemed worth its while .

Edison International pulled the plug on two faulty California nuclear plants in June , while FirstEnergy (NYSE:FE) knocked off 10% of its total capacity with a July announcement of early retirement for two coal-fired power plants .

For all three of these utilities, natural gas didn't singlehandedly force closures – but it was the straw that broke the camel's back. As other costs or regulatory burdens crept in, continually cheap natural gas pushed management into a tough spot: invest in alternative energies and hope for competitive prices – or cut the cord before gas grabs any more profits from these plants.

On the flip side, some companies are pouring cash into natural gas investments. AGL Resources (NYSE: GAS) recently received two regulatory approvals for around $400 million of gas infrastructure upgrades , while NextEra Energy (NYSE:NEE) and Spectra Energy (NYSE:SE) are teaming up for a massive $3 billion project to bring Florida its third major natural gas pipeline .

Natural gas for the win?
No one's denying the benefits of natural gas. It's keeping our economy on the recovery path, serves an enviable substitute for oil from foreign countries, might potentially serve as a "bridge fuel" to a new environmental era of energy use, and LNG exports could work wonders for the U.S.'s international trade deficit.

But history (and my mother) remind me of one incredibly important point for countries and investors alike: don't put all your eggs in one basket. Natural gas consumption is expected to increase 0.6% annually through 2040 . Traditionally slow-to-change industries are expected to increase their own natural gas use by a whopping 18% by 2025, and another 6% in the following 15 years . And by 2019, the U.S.'s booming production will transform our nation into a net exporter of natural gas . 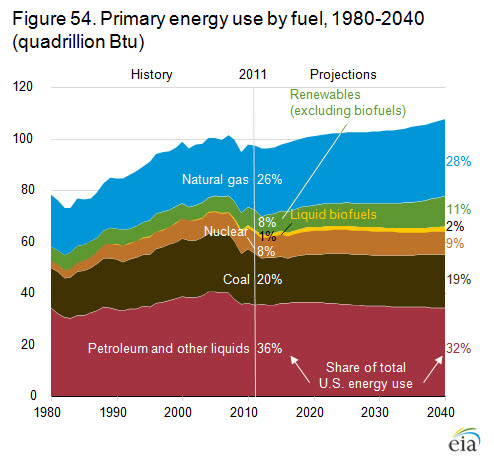 With green lights ahead for gas, it's easy to want to cash in on the newest energy push – and you can. But with energy companies crippling their own diversity for natural gas investments, investors should keep their own portfolios dynamic and diversified.