Over the last several years, the world has begun its switch from paper money to plastic cards. This trend has fueled incredible growth for credit card companies and made Visa (NYSE:V) a goldmine for investors. After pulling back about 9% in the last month, Visa could be a great value play at this level.

The company and its quarter
Visa is the world's largest retail electronic payments company. It allows consumers, businesses, banks, and governments in more than 200 countries to connect and collect payments without using cash or checks.

Visa released its third-quarter report on July 24, and it was nothing short of spectacular:

These results were also impressive compared to the third quarter of 2012. Visa's Q3 2013 earnings per share rose 20%, revenue rose 17%, and net income rose 16% year over year. The most important statistic to note is the 13% growth of payment volume to $1.1 trillion. This boosted service revenue growth, which pushed earnings higher than expected. It's safe to say Visa delivered in the third quarter.

Earnings outlook
Management is confident that it'll meet fiscal 2013 guidance, and that its earnings momentum will carry over into 2014. CEO Charles Scharf noted that accelerated opportunities within mobile and e-commerce, along with increased payment volume internationally, would primarily drive its growth going forward.

Here are the earnings from 2011 and 2012, with the consensus analyst estimates for 2013 through 2015 provided by TD AMERITRADE: 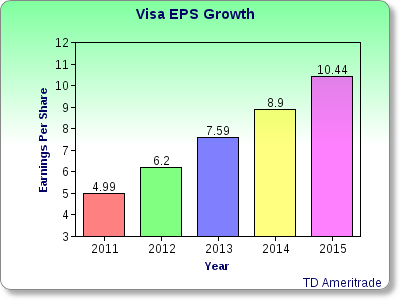 Where it could go from here
The chart above clearly shows Visa's earnings are consistently moving in the right direction. Today, Visa trades around 21.5 times earnings; if it were to trade at this same multiple in 2015, its shares would exceed $220. This represents a phenomenal potential return for investors and makes the case that Visa is a value play at its current level.

Free cash flow at its best
In its third-quarter report, Visa affirmed that it expects free cash flow of $6 billion in 2013 and another $5 billion in 2014. With cash and cash equivalents of $6.5 billion and consistent free cash flow projections, Visa is in a great position to continue to benefit its shareholders by paying dividends and buying back shares.

Visa currently pays a quarterly dividend of $0.33 per share, giving it a yield of about 0.76%. That yield wouldn't catch most investors' eyes, but remember that Visa has raised this dividend for five consective years. I expect this trend to continue with a raise in the fourth quarter due to the rising free cash flow.

In the third quarter, Visa repurchased 6 million shares for roughly $981 million. On the heels of this bullish move, management announced another $1.5 billion in repurchases by July of 2014. If the stock continues to trade at these low levels, I would expect Visa to increase the current repurchase to more than $2 billion.

Visa, MasterCard, and American Express are all extremely strong companies, as this comparison shows. MasterCard trades slightly higher than its five-year average price-to-earnings of 24.8, and American Express has exceeded its average of 15.8 much more. This information gives the impression that the underlying stocks are ready for a pullback in order to make a healthy run higher.

With that said, I prefer Visa because of its underperformance year to date and its pullback of over 9.5% from its 52-week high, all while remaining the largest player in the industry. I'd only consider this a bad situation if earnings flatlined or the smaller companies were taking share -- neither of which seems likely, given Visa's strength going forward.

The bottom line
Visa could be a screaming buy at its current price. It has the potential to outperform its industry and the overall market for the remainder of 2013 and beyond. MasterCard and American Express are other ways to play the growth of the industry, but some investors may want to wait for a pullback in those names before considering an investment. Take a look and see if the largest electronic payments company in the world would fit in your portfolio.