Let's see what the numbers say about Johnson Controls (JCI).

Investors love stocks that consistently beat the Street without getting ahead of their fundamentals and risking a meltdown. The best stocks offer sustainable market-beating gains, with robust and improving financial metrics that support strong price growth. Does Johnson Controls (JCI 3.00%) fit the bill? Let's take a look at what its recent results tell us about its potential for future gains.

What we're looking for
The graphs you're about to see tell Johnson's story, and we'll be grading the quality of that story in several ways:

What the numbers tell you
Now, let's take a look at Johnson's key statistics: 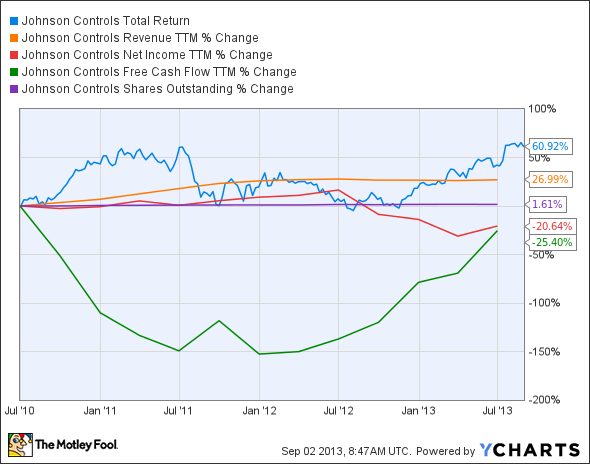 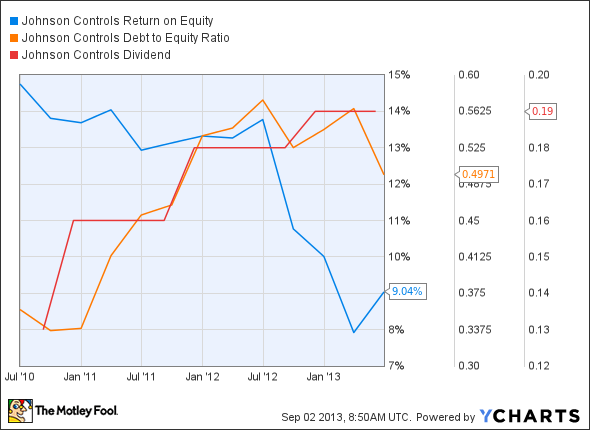 How we got here and where we're going
Things don't look good for Johnson today. The auto-parts manufacturer musters only two out of nine passing grades, and both of those were earned on dividend metrics that might soon be threatened as well. Despite this broad-based financial weakness, Johnson's shareholders have enjoyed solid growth over the past three years. Is this rebound sustainable, or will Johnson's fundamentals catch up to it in the end? Let's take a closer look.

Johnson's building efficiency and automotive experience business outperformed in the Asia-Pacific region during its most recently reported quarter, but sluggish economic growth in the United States and ongoing weakness across Europe has impeded the company's progress. Fool contributor Sean Williams notes that a recent slowdown in government spending could further hinder Johnson's U.S. business. With both India and China now expected to slow down in the coming quarters, the company can ill afford to endure Western weakness for much longer.

Should Eastern weakness pass, Johnson would be well-positioned to capitalize on a largely untapped Chinese market. At present, Johnson is a dominant auto-parts supplier in that country, and its deals with Ford (F 2.21%) and General Motors (GM 2.65%) (among others) have installed Johnson parts in roughly 80% of all cars built worldwide. Both American automakers have substantial presences in China -- GM plans to build new plants worth $11 billion in that country by 2016, and Ford already has five manufacturing facilities operating there. Fool contributor John Rosevear notes that a Chinese automaker might be interested in buying Johnson's electronics segment, and Johnson could structure such a deal in a way that helps them gain even greater access to the Chinese market.

Johnson has already sold off its HomeLink vehicle remote control business for $700 million, which will help the company pad its coffers. There doesn't appear to be much threat of Johnson depleting its cash, as trailing-12-month free cash flow remains in the $1 billion range, but refocusing on its core parts segments could help the company return its bottom line to a growth trajectory.

Putting the pieces together
Today, Johnson Controls has few of the qualities that make up a great stock, but no stock is truly perfect. Digging deeper can help you uncover the answers you need to make a great buy -- or to stay away from a stock that's going nowhere.

Fool contributor Alex Planes has no position in any stocks mentioned. The Motley Fool recommends Ford and General Motors. The Motley Fool owns shares of Ford. Try any of our Foolish newsletter services free for 30 days. We Fools may not all hold the same opinions, but we all believe that considering a diverse range of insights makes us better investors. The Motley Fool has a disclosure policy.

Down Between 9% and 42%: 3 Top Dividend Stocks That Are Too Cheap to Ignore