GE slashed its dividends by the knees in 2009 as a reaction to the panic of 2008. The company is boosting its payouts in the post-crisis era, but it will take several more years to reach 2008's record levels again. 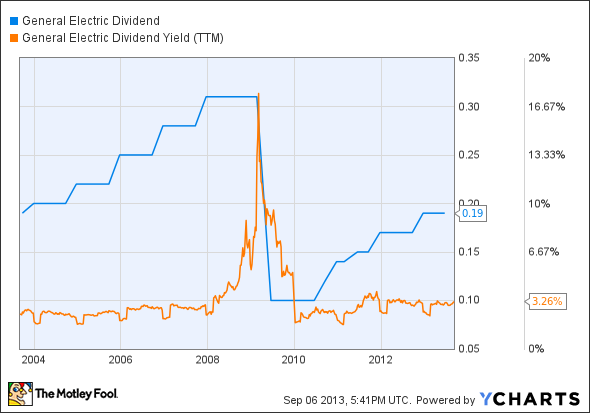 All told, GE has offered one of the slowest 10-year dividend growth trends among the 30 Dow Jones (DJINDICES:^DJI) components. Only three stocks lag behind GE in this regard. The megabanks on the index, Bank of America (NYSE:BAC) and JPMorgan Chase (NYSE:JPM), have been forced to hold their dividends extremely low by FCC rules meant to prevent another financial disaster. JPMorgan is raising its payouts once again, but Bank of America isn't even asking for permission yet. Aluminum producer Alcoa (NYSE:AA) suffered financial trauma from the same 2008 panic and has been slow to recover. The company depends on healthy financial markets to drive its customers' large construction projects, making Alcoa a proxy of sorts to the banking sector.

All of these stocks, GE included, have plenty of reason not to boost their dividends through the roof. Don't forget that GE also runs a large financial arm that is the company's largest and most profitable division. It's a bank stock for investors who don't like bank stocks.

GE's yield always seems to hover just north of 3%, which is above the Dow's average yield of 2.6%. But share prices have lagged the overall market for many years, and the dividend checks aren't enough to make up for the difference. GE investors trail behind the Dow even with their dividend checks reinvested: 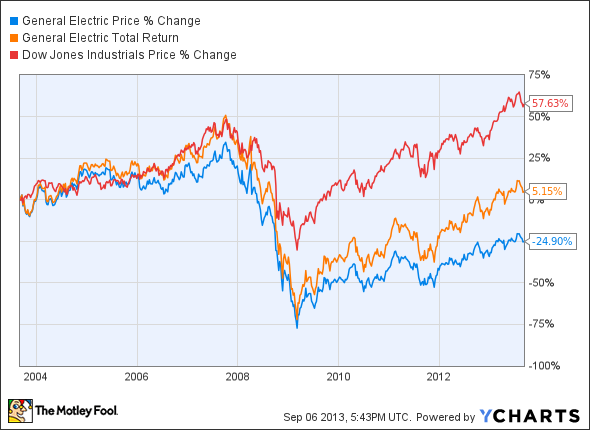 However, past performance (or the lack thereof) is no guarantee of future returns. GE has plenty of headroom to increase its dividend payouts and should do so in the next few years. Still, looking at these charts hardly inspires confidence in GE's income-generation prowess. I'd advise dividend investors to put GE on the back burner for now. The company is simplifying its operations, which might lead to stronger bottom-line results and more generous dividends as the plan works out. Just add GE to your Foolish watchlist and keep an eye on that situation.