Let's see what the numbers say about AT&T.

Investors love stocks that consistently beat the Street without getting ahead of their fundamentals and risking a meltdown. The best stocks offer sustainable market-beating gains, with robust and improving financial metrics that support strong price growth. Does AT&T (T -0.14%) fit the bill? Let's take a look at what its recent results tell us about its potential for future gains.

What we're looking for
The graphs you're about to see tell AT&T's story, and we'll be grading the quality of that story in several ways:

What the numbers tell you
Now, let's take a look at AT&T's key statistics: 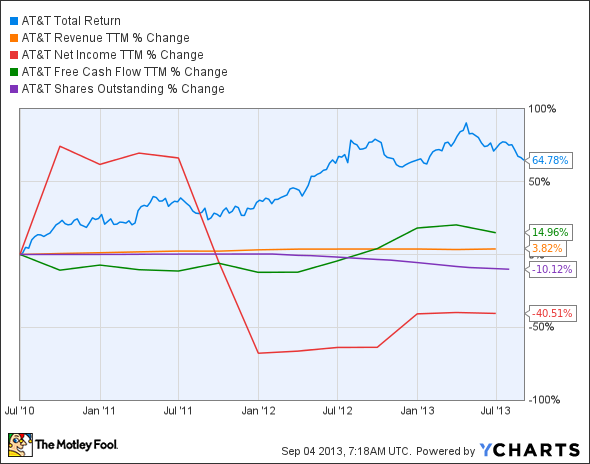 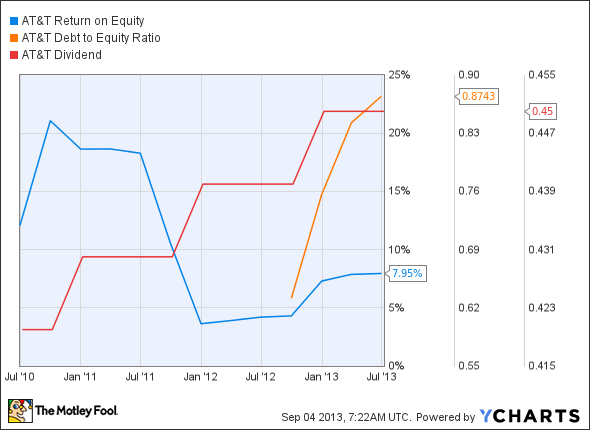 How we got here and where we're going
Things don't look very favorable for AT&T today -- the telecom giant musters a miserable one out of nine passing grades. Its revenue growth fails to keep pace with three years of inflation, and a weakened net margin has been its main sources of weakness. However, AT&T shareholders have enjoyed solid growth over the past three years as investors flock to perceived safe havens. Is AT&T's share-price improvement sustainable, or will its recent fundamental weaknesses produce underperformance going forward? Let's dig a little deeper to figure out what the future may hold.

Despite rather underwhelming top and bottom-line growth in recent quarters, AT&T is still finding some growth in a saturated market. In its latest quarter, the company sold a record 6.8 million smartphones, and added 551,000 postpaid customers to its subscriber base. AT&T has also been looking for overseas acquisition targets as U.S. wireless market growth has stagnated over the past few quarters. This may be necessary in light of continued industry consolidation -- Verizon Communications (VZ 0.80%) has recently announced a takeover of Vodafone's 45% stake in Verizon Wireless in a monstrous deal worth $130 billion.

AT&T never really had a chance of gaining a stake in that company, but with any buyout of T-Mobile (TMUS 1.03%) long since rejected by federal regulators, and with Sprint becoming a Softbank property, the U.S. wireless industry has been effectively decided for the foreseeable future. All that remains now is a price war, and that will not help AT&T's flagging margins at all.

There does remain one rather bite-sized acquisition on the horizon, though. My Foolish colleague Evan Niu notes that AT&T has been mulling a bid for more spectrum, which would enable it to provide enhanced wireless services to more consumers. The company is planning to take over Leap Wireless' (NASDAQ: LEAP) prepaid Cricket service for an estimated $1.2 billion, which not only adds coverage, but also brings on one of the few prepaid "success" stories in an American market dominated by two-year contracts. AT&T has also been deploying large and small cell cites as part of its Project Velocity IP program to strengthen its LTE coverage.

AT&T has also rolled out a new mobile upgrade plan called "AT&T Next," which will allow customers to upgrade their devices every year without any down payments, fees, or service contracts. However, they will be charged a fixed monthly installment in the range of $15 to $50 depending on the handset. Fool contributor Doug Ehrman notes that T-Mobile's JUMP! Plan and Verizon's Edge are two options already allowing customers to upgrade twice per year, but the latter requires customers to pay half of the device cost before upgrading.

Putting the pieces together
Today, AT&T has many of the qualities that make up a great stock, but no stock is truly perfect. Digging deeper can help you uncover the answers you need to make a great buy -- or to stay away from a stock that's going nowhere.