Finding a quality apparel company to invest in given the current economic environment can be challenging.

Jones Group (NYSE: JNY) is a small-cap company that designs and markets wholesale apparel, footwear, and accessories. Its brands include Kurt Geiger, Jessica Simpson, Nine West, and Jones New York. You might recognize these names, which might lead you to think that the company has performed well over the years. But that hasn't been the case.

The stock has depreciated 2% over the past three years, at a time when the market stampeded higher. Therefore, you have to wonder how the stock is likely to perform if we see a weaker stock market in the future. The good news is that Jones Group is still seeing top-line growth.

Company strategy
Jones Group is in the midst of restructuring. It plans on closing 120 under-performing locations through 2013/2014. All store closings since 2009 are expected to save the company $14.2 million, and the majority of the savings will come at the expense of employees.

Jones Group also seeks to optimize its operations to further cut costs. One way the company aims to accomplish this goal is by consolidating its supply chain facilities. Furthermore, Jones Group is paying very careful attention to store profitability, and if it's not pleased with the results, it will either close a location or convert it to a brand that has better revenue potential.

Mixed results
In the second quarter, revenue dipped 1.1% to $845.6 million year-over-year, and diluted EPS swung to a loss of ($0.05), versus a gain of $0.10 in the year-ago quarter. The loss is a worrisome sign, especially considering all of the cost-cutting moves that have been taking place. That said, there is still a lot more cost cutting to come. In regards to revenue, let's take a look at its direction in a breakdown by segment.

That's quite a mix. The big drop in revenue for domestic wholesale sportswear stemmed from reduced shipments to under-performing retail stores. The discontinuation of the Joneswear product line was due to a strategy change at J.C. Penney.

Under-performing its peers
Jones Group has a market cap of $1.1 billion, making it similar in size to Brown Shoe (CAL -0.40%), with a market cap of $984 million. These two companies are also trading at similar multiples of 13 times earnings and 14 times earnings, respectively. To further the similarities, they have both seen slowing annual top-line growth, and have both been inconsistent on the bottom line.

Brown Shoe is primarily focused on footwear, which can be found at locations like Famous Footwear and Naturalizer.

If you're looking to compare Jones Group with a company that's more focused on apparel, then VF Corp (VFC -1.65%) should be considered. VF Corp is a much larger company, with a market cap of $20.6 billion, and its target consumer is a bit different. Many of its brands target outdoor and sports enthusiasts, including The North Face, Timberland, and NFL.

While Jones Group has been downsizing, VF Corp has been acquiring companies, beating analyst expectations, and upping its guidance. VF Corp expects earnings to grow at a 13% annual rate over the next five years, and revenue to increase at a 10% annual rate over the same time frame. With VF Corp's broad and diversified portfolio, these are realistic possibilities. And if the consumer continues to weaken, then VF Corp is likely to offer more resiliency than Jones Group.

On a fundamental basis, VF Corp is more impressive than Jones Group and Brown Shoe.

Jones Group might be more affordable at the moment, but not by much, and it would make sense to pay a small premium for a company like VF Corp that turns more revenue into profits, more investor dollars into profits, offers a higher yield, and has fewer people betting against it. 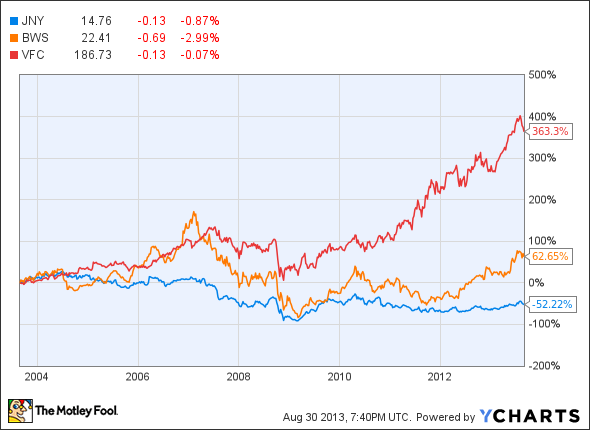 Not only did VF Corp dominate Jones Group over this time frame, but any company that can't manage to reward shareholders in a bull-market era should only be considered with caution.

Conclusion
Despite all the negativity above, Jones Group has potential. After all, its annual revenue has continued to improve, which can't be said for many companies throughout the broader market. Furthermore, it has several strong brands that are performing well. If the company can effectively cut costs and focus on its core brands, then you could see an impressive turnaround.

However, this would be a high-risk play, especially considering the current economic environment and weak consumer. If you want to be in this space, then VF Corp is likely going to be your best long-term option.