Please ensure Javascript is enabled for purposes of website accessibility
Log In Help Join The Motley Fool
Free Article Join Over 1 Million Premium Members And Get More In-Depth Stock Guidance and Research
By Lee Samaha - Sep 9, 2013 at 8:58AM

Quest Diagnostics represents good value, and its earnings growth prospects are largely over its internal execution.

End market conditions aren't great for diagnostics information services company Quest Diagnostics (DGX 0.97%), but that doesn't stop it from being a good value. If you're looking for a value play whose prospects are tied to its internal execution rather than the economy, Quest could fit the bill. It's worth a look for investors looking to balance their portfolio.

Quest's quest gets harder
It's been a tricky year for companies servicing hospitals, and Quest has suffered as physician office visits and hospital admissions have come in lower in the first half of 2013 than in 2012. Indeed, during its conference call, the company outlined that growth "is not as strong as what we thought we were going to see this year." Moreover, after being "encouraged by April numbers," conditions appeared to get worse. Subsequently, Quest cut its full-year revenue guidance to a decline of 1% to 2%, from its previous forecast of flat to 1% growth. In addition, the high end of earnings per share guidance was cut by $0.05, leaving the new range at $4.35 to $4.50.

It's never good news to see a company cutting guidance, but Quest's real aim this year is to restructure its business so it can regain any market share lost to rivals like LabCorp (NYSE: LH) and Bio-Reference Labs (BRLI.DL). Quest's management has acknowledged that it hasn't grown in line with the market , and this can easily be seen by looking at its growth rates compared with those of its peers. 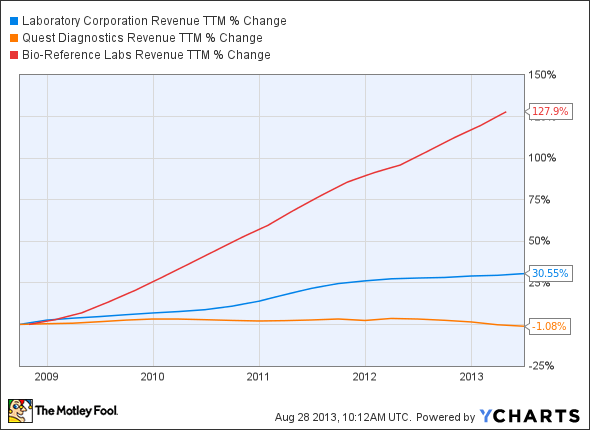 Its chief competitor, LabCorp, managed to grow its organic volumes at 1.4% in the last quarter and is forecasting 2% to 3% revenue growth for the full year. This is a far cry from Quest's forecast of declining revenues.

The real question is: What is Quest doing to get back to industry growth rates?

Quest restructures and goes for growth
Earlier in the year, Quest outlined its five-point program to get back on track; I discussed this in more detail in a previous article. The good news from the company's latest earnings results is that it appears to be executing well on the plan. The recent sale of its royalty rights to ibrutinib (an experimental cancer therapy) to Royalty Pharma for $485 million  is in line with its strategy to focus on diagnostic information services. The proceeds of the disposal will also help it to return cash to shareholders.

Furthermore, the management's restructuring initiatives are being implemented. The targeted run-rate savings of $600 million by 2014 were declared to be "tracking very well" with plans. The really interesting news relates to its growth plans, however. A quick look at the chart above shows that its much smaller rival Bio-Reference has achieved much faster growth rates. This is largely due to Bio-Reference's focus on higher growth areas like esoteric testing, molecular diagnostics, and women's health. It seems that Quest has been watching closely.

Indeed, the company has now focused on driving growth with its esoteric testing services, and it recently announced an extension of its relationship with women's health company Hologic (HOLX 0.28%). The deal's main focus is on Hologic's APTIMA product range -- which includes tests for human papillomavirus, chlamydia, and gonorrhea -- and allows Quest to offer new tests to its customers. Moreover, Quest is planning to release tests that create "a solution around BRCA1 and BRAC2." These are genes whose mutations can be tested to try and ascertain a women's susceptibility to breast cancer.

Where next for Quest Diagnostics?
Ultimately, its second-quarter results were disappointing from a top-line perspective. The investment case for the company remains in place, however. Its guidance for free cash flow generation is around $750 million, representing around 6.1% of its current enterprise value. Remember that this is in a year of raised capital expenditures due to the restructuring and investment.

Analysts have earnings rising 8.5% in 2014.  If Quest achieves its aim of $600 million in cost savings and getting the company back to 4% revenue growth rates, then its current valuation of 13.5 times earnings estimates for 2013 will start to look cheap. It's an interesting value proposition.