Please ensure Javascript is enabled for purposes of website accessibility
Log In Help Join The Motley Fool
Free Article Join Over 1 Million Premium Members And Get More In-Depth Stock Guidance and Research
By Maxx Chatsko - Sep 10, 2013 at 8:04AM

America is incredibly dependent on foreign uranium. Is that a threat to your investments?

Atomic energy supplies approximately one-fifth of all energy used in the United States, which is the world's largest producer. However, due to the geographic realities associated with the world's distribution of uranium deposits Uncle Sam is incredibly dependent on foreign suppliers. Consider that 83% of the 58 million pounds of uranium purchased by American nuclear plants in 2012 was imported. Meanwhile, 38% of enriched uranium required came from foreign enrichment facilities. By comparison, only 40% of crude oil needs were imported last year. 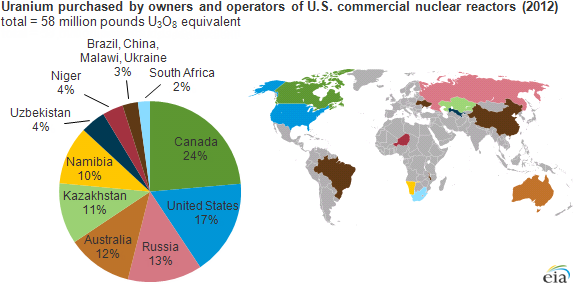 To be clear, the nuclear fuel cycle begins with mined uranium, is processed into uranium concentrate (the focus of the graphic), converted to uranium hexafluoride, enriched, and fabricated into reactor-ready fuel. While there is a decent amount of diversification in the map above, there are also a limited number of sources to choose from. For instance, Exelon (EXC 1.78%), the nation's largest generator of nuclear energy, is set to acquire 60% of its fuel needs from just three producers through 2017. Given nuclear energy's importance to the national grid, how big of a risk is the industry's dependence on five countries for 84% of its fuel? Is it the biggest risk facing nuclear generators? Fool contributor Maxx Chatsko looks deeper in the following video.

Fool contributor Maxx Chatsko has no position in any stocks mentioned. Check out his personal portfolio, his CAPS page, or follow him on Twitter @BlacknGoldFool to keep up with his writing on energy, bioprocessing, and biotechnology.

Joel South has no positions in any stocks mentioned. The Motley Fool recommends Exelon and Southern Company. Try any of our Foolish newsletter services free for 30 days. We Fools may not all hold the same opinions, but we all believe that considering a diverse range of insights makes us better investors. The Motley Fool has a disclosure policy.