With the industry as a whole taking prudent steps to help prices recover, now may be the time to get in to this aluminum producer.

Alcoa (AA) is well known for being one of the world's largest aluminum producers, not to mention the unofficial opener of every earnings season. However, like most materials companies, Alcoa has underperformed over the past couple of years, as rising expenses and oversupply in the market combined with a lack of demand. Alcoa has taken several steps to turn things around, but the light at the end of the tunnel isn't quite there yet. Is this aluminum leader worth taking a chance on, and if so, what can we expect out of it in the next few years if things begin to go well.

Why Alcoa has underperformed
The main reason for Alcoa's underperformance is that aluminum prices have been depressed for some time now. There has been a problem since late 2008 in the aluminum industry, as well as in most other metal industries, of too much supply and not enough demand. This has picked up in the past two years due to slower than expected growth in the emerging markets and very little, if any, production cuts. China produces about 44% of the world's aluminum, so it's easy to see how if China produces too much for their own needs, they have more to sell in foreign markets (such as the U.S.), which depresses prices. 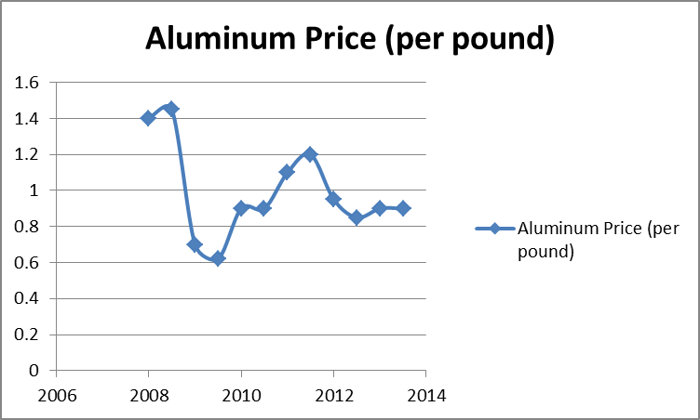 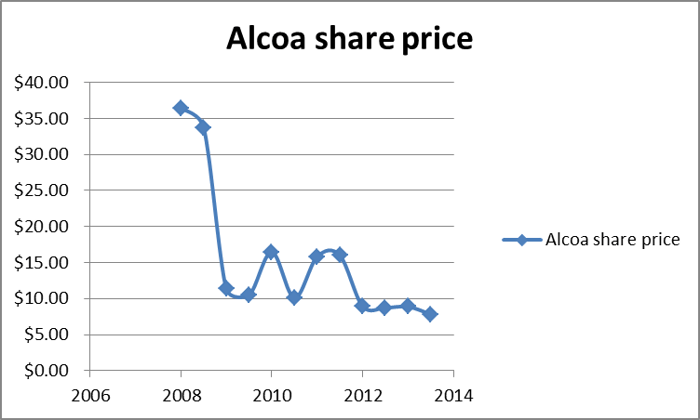 While it's not a perfect correlation by any means, there is a definite link between the spot price of aluminum and Alcoa's share price. There are other factors that cause shares to rise and fall, such as labor costs and production costs, which have been disproportionately high, especially after the price of aluminum started to fall several years ago.

How do they plan to turn things around?
Alcoa and its competitors are beginning to realize that the keys to long-term profitability are production cuts and more efficient operations. A recent Bloomberg report indicates that while aluminum consumption is expected to grow by about a 6% annual rate worldwide for the next several years, there are about 3.2 million tons of announced capacity cuts that may take place by the end of next year. To put this in perspective, worldwide aluminum production totaled 45.2 million tons last year, so this would be a capacity reduction of over 7%. When combined with 6% higher demand, we can expect aluminum prices to rise by around 13% in total, if everything goes according to plan. However, at this moment, that is a big "if."

Threats and competition
Alcoa also faces stiff competition, both from Chinese rivals and from large, diversified companies who can employ economies of scale and run more efficiently. A good example of the latter is Rio Tinto (RIO 0.93%), which is about eight times the size of Alcoa in terms of market cap. In addition to aluminum, which only accounts for 18% of total revenues, Rio produces iron ore (44%), coal (10%), copper (12%), and diamonds and minerals (7%). In other words, not being too dependent on aluminum revenues puts companies like Rio Tinto in a good position to weather the storm of low aluminum prices. Rio is actually pretty cheap right now, with shares trading for less than 10 times this year's expected earnings.

On the Chinese side, Aluminum Corp of China (ACH 1.66%) was established to be the primary aluminum producer in China. The company has had the same oversupply problems as Alcoa and the charts of the two companies' share prices look incredibly similar. Having said that, the state-controlled nature of the company should cause added nervousness when considering the company as an investment. On a positive note, however, the company (also known as CHALCO) announced in June that they plan to cut production by 9% in order to help boost aluminum prices. It is always refreshing when companies decide to become part of the solution and not part of the problem.

To buy or not to buy?
If you believe that the efforts by the aluminum producers to control production capacity will succeed, and that the world economy will continue to grow over the next several years, there could be money to be made with Alcoa. Next year's consensus calls for earnings of 50 cents per share, meaning that shares currently trade for about 15.8 times next year's earnings, which may sound high for such an uncertain industry. However, the estimates from the 18 analysts covering the company range all the way up to $1.00 per share, which would result in a price target of about $13.00 per share given Alcoa's historic P/E in times of upward momentum in the industry. While the recovery in the aluminum industry is far from certain, it could pay off very well if things go right over the next year or so.