Technological advancement is an ever-evolving story of "out with the old and in with the new." The nation of India, for example, decided to end its 163-year-old telegram service this year as the age of mobile phones, Facebook, and email have made telegrams obsolete.

The advent of the Internet and lightning-fast communication has certainly bought much change, and the world of money transfer is no exception to this trend.

So, what is the new "gig in town" that threatens to displace older technologies? The answer is online money transfer. Online money transfer is revolutionizing how people send money from place to place around the world. I believe one company is specially poised to reap massive rewards from this technological shift: Western Union (NYSE:WU).

Western Union's competitive advantage
You might be scratching your head right now, thinking "Western Union? Aren't those the guys who used to dominate the now-dead telegram industry?" You're exactly right. Englewood, Colorado-based Western Union was the dominate force in the telegraph industry in the late 19th century, but discontinued its telegram service in 2006 for obvious reasons.

So, it might at first seem that Western Union is an enduring relic of the past. But the company has not only survived disruptive new innovations; it has effectively utilized new innovations and has overhauled its business model to keep pace with a fast-changing world.

You are probably familiar with the phrase "change is the essential continuity of life" in one form or another. Western Union has taken this adage to heart and has navigated momentous changes for over a century and a half. The company is an industry leader in global money transfer and still has a toehold in communications. Western Union's products and services include consumer-to-consumer money transfer, businesses solutions, bill payment services, and stored value options such as prepaid cards. Consumers can send money online, by phone, from 100,000 ATMs or through more than 520,000 agent locations worldwide.

Compare those statistics with the prospects of Western Union competitors MoneyGram (NASDAQ:MGI) and Xoom (NASDAQ:XOOM.DL). MoneyGram has only 300,000 agent locations, while Xoom has no offline sales network.

Western Union's ability to turn revenue into cash is unmatched...Upstart Xoom only recently recorded its first quarterly profit, and it trades at 75 times annualized earnings. MoneyGram trades for 17 times forward earnings...Western Union deserves a higher valuation [a]t 10 times earnings and free cash flow, and with a competitive advantage in offline money transfer...Western Union is a two-for-one deal. You get a piece of the legacy assets (a leading offline money transfer business), and an online business growing at 33% per year. Investors are severely discounting its highly profitable offline business and pricing power going forward.

In addition, Western Union currently touts an impressive quarterly dividend, while MoneyGram and Xoom both do not offer this cash incentive to investors.

Although Western Union shares have made impressive gains already in 2013, the stock still has plenty of upside for value-oriented investors. MoneyGram shares have appreciated due to buyout rumors, while Xoom shares have seen a paltry 12% gain in its life as a public company most likely in part due to Xoom's first quarterly profit ever reported: 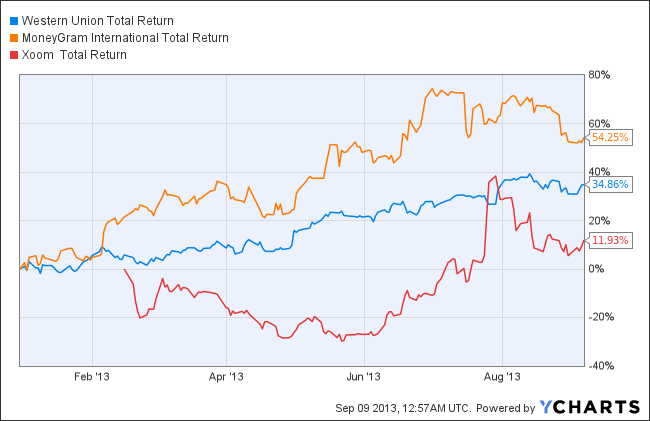 MoneyGram and Xoom might both be profitable companies but are currently trading at levels exceeding their shares' fair valuation. Western Union, on the other hand, is priced for further sustainable growth ahead.

Conclusion
Unfortunately for Indian telegram companies, they definitely would not have been good investments this year as new technologies have long left telegrams in the dust. Western Union, a former telegram empire, is a company that has successfully navigated our fast-paced global economy for over a century and a half and offers investors a compelling long-term investment choice.