Small-cap stocks are mostly feared and avoided by investors. However, there are a few things investors should consider before running in the opposite direction.

As the Fed's "tapering"-induced uncertainty causes the markets to remain volatile, many investors are growing apprehensive of this year's strong uptrend in equity prices. While some experts see the recent decline as the start of a downward reversal in the equity markets, others consider it no more than a breather that the market needs to continue its upward surge.

Whatever the market conditions, the majority of investors prefer the stability of large-cap stocks over mid caps and small caps. And why not! After all, large-cap stocks provide that extra level of security and "cushion," which go a long way in helping investors to ride out phases of extreme stock market volatility.

Having said that, it's important not to forget the contribution of mid- and small-cap stocks to overall market sentiment: They lead the overall market bias, be it bullish or bearish.

Small caps account for a big chunk of the total investable universe of stocks. Take, for example, two well-known, broad-based stock indexes: the S&P 500 and the Russell 2000. The S&P 500 is a large-cap index comprising 500 stocks. Its small-cap counterpart, the Russell 2000, consists of 2000 stocks from the small-cap space.

These sheer numbers, or "market breadth," give small caps more influence on the direction of the overall equity markets than the large caps. Of course, fundamentally speaking, the large caps do most of the talking, because when it comes to revenue and earnings, they are comfortably ahead of the small caps. But by no means should this suggest that small caps are to be ignored.

But this can be a double-edged sword. I have already mentioned that small caps lead the bullish or bearish phase in the stock market. This means that these stocks will be the most vulnerable to any negative news on the economy. It is due to this extreme behavior that small caps are considered extremely volatile in nature and are shunned by most investors.

The following two charts focus on this risk-return characteristic of small caps versus large caps. The first chart depicts the historical volatility characteristics of three small-cap ETFs and one large-cap ETF over the course of four years. The volatility line depicts the 30-day rolling standard deviation of each of the ETFs. To simplify things, a higher volatility line signifies more risky behavior than a smaller one.

Not surprisingly, all of the small-cap ETFs exhibit higher volatility than the large-cap one. This shows that the volatility most investors fear is real.

However, the rewards are great, too. The flip side suggests that the small-cap ETFs have outperformed the large caps almost on a regular basis (remember, I said that small caps lead the overall market sentiment). The following chart confirms the same. 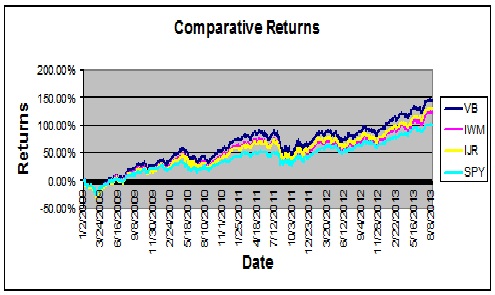 Over this period of time, the small caps have returned handsome profits to their investors -- even more than the large caps.

While there are a number of ETFs available to give you exposure to the small-cap space, the three above-mentioned ETFs are my favorites, as they provide a small-cap pure play and are the most popular among investors.

IWM is probably the biggest and most well-known product in this segment. It tracks the Russell 2000 Index and charges investors just 20 basis points in fees and expenses. Its massive asset base of $24.11 billion speaks volumes about its popularity. It has gained about 27% in the past year and pays out a dividend yield of about 1.7%.

Compared to these two, VB provides an extremely low cost structure. It charges just 10 basis points in fees and expenses, and it has returned an impressive 27.5% over the last year. VB manages an asset base of $7.11 billion and pays out a dividend yield of 1.5%.

There's no doubt that the U.S economy has come a long way since the 2008 financial crisis and is treading the path of recovery. An improving labor market, a rise in consumer sentiment, and the recovery of the housing market surely point toward a recovering economy and are bullish signs for small caps going forward. And these ETFs are diversified and generic ways to play the segment effectively.

Ankush Shaw has no position in any stocks mentioned. The Motley Fool has no position in any of the stocks mentioned. Try any of our Foolish newsletter services free for 30 days. We Fools may not all hold the same opinions, but we all believe that considering a diverse range of insights makes us better investors. The Motley Fool has a disclosure policy.

These Are the Most Popular ETFs Since the Pandemic Started

The S&P Shines As Small-Caps Crumble. Should You Buy Big?

Do ETFs Disrupt the Stock Market?

How to Rebalance Your Portfolio