Specialty food retailers have been doing well recently. There has been a lot of demand for organic food, which drives sales in specialty retail stores. People are becoming increasingly health conscious, so the demand for these products is evident. Retailers such as Whole Foods Market (NASDAQ:WFM) and The Fresh Market (NASDAQ: TFM) are becoming increasingly important.

A quick look at stock prices shows the growth of these specialty grocers. 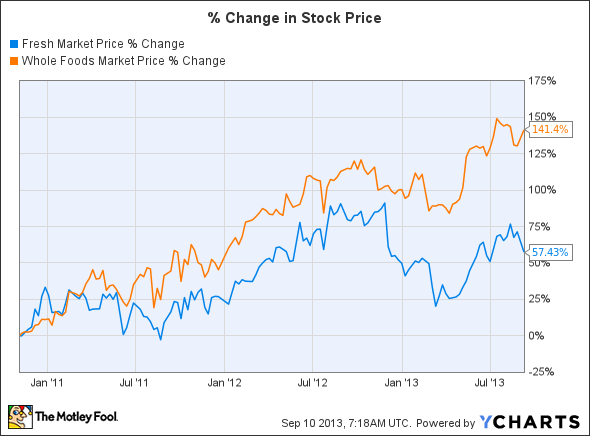 Fresh Market's stock price has grown almost 57.4% since its IPO. Growth has happened despite problems like rising input prices, consumers' restricted spending and the economic slowdown. In fact, Whole Foods Market's stock price appreciated a whopping 141.4% during the same period. Return to investors, as shown in the chart, can be easily derived if we take a look at the changes in revenue for these companies in the last few years. 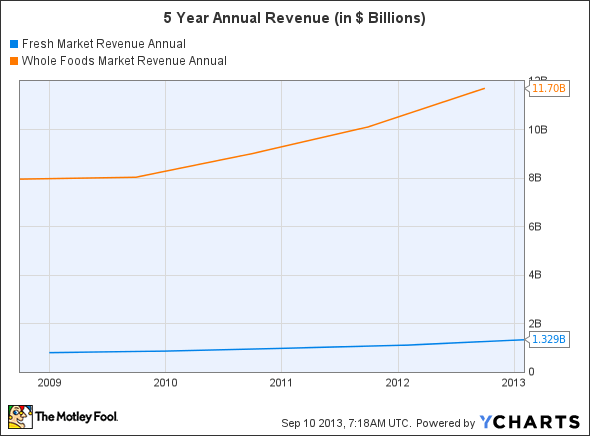 However, Fresh Market has not been a very convincing performer. Its recent quarter was not up to analysts' expectations. Though earnings stood at $0.32 per share, in line with expectations, its revenue came in at $354.8 million, slightly below estimates . An increase in the number of transactions, as well as transaction size, drove revenue higher. Also, an increase in the number of stores helped Fresh Market's top line expand.

On the other hand, Sprouts Farmer's Market (NASDAQ:SFM) performed remarkably well. Revenue increased 45% during its first quarter, and earnings doubled to $0.10 per share. The company has been expanding since its IPO and it is being accepted well in new markets. Sprouts opened six new stores in its recent quarter .

However, it's not only the new stores that are helping the new company's top line grow. This is highlighted by solid same store sales growth of 10.8%, driven by increased consumer demand. Sprouts' same store sales metric is higher than both Fresh Market (3.4%) and Whole Foods Market (7.5%).

Coming back to Fresh Market's performance, the company plans to undertake a number of strategies to improve its performance. Firstly, the grocer plans to open a total of 21 to 22 new stores during 2013, and it will accelerate store openings in the next two quarters .

Moreover, Fresh Market plans to accelerate its promotions for the peak holiday season. The company has also been investing in new products in order to attract more customers.

Fresh Market has a number of moves in its bag, and demand for organic and natural foods is increasing, but the company is not performing at par with its peers. Both Whole Foods Market and Sprouts Farmer's Market have been performing better, with higher same store sales growth.

Moreover, Fresh Market has lowered its earnings outlook for the year to $1.50 to $1.55 per share from $1.51 to $1.58 per share in the wake of higher costs associated with its store expansion plans. I would suggest not putting your money in this company--if you want to invest in this industry, other players might provide better returns.

Is The Fresh Market Fresh Enough For An Investment? @themotleyfool #stocks $WFM $SFM Next Article
Current