Jeff Bezos started Amazon (NASDAQ:AMZN) in his garage in 1995 as an online bookstore, something no one else was doing at the time. Since then the company has experienced amazing growth. Amazon may not yet have the scale that Wal-Mart (NYSE:WMT) has as the world's largest retailer with more than $400 billion in annual global sales, but can we look for Amazon to catch up and even surpass Wal-Mart?

It's about the rate of growth
Last quarter, Wal-Mart had nearly $117 billion in earnings and Amazon had $15.7 billion. There really doesn't seem to be any comparison between the two. But if you take into consideration the fact that Amazon's growth rate since 2004 has been nothing short of phenomenal, you'll understand why I believe Amazon will become the biggest retailer. Every quarter they've experienced an increase in revenue. Amazon's quarterly revenue is up 1,280% since 2004, while Wal-Mart is only up 85% since then. 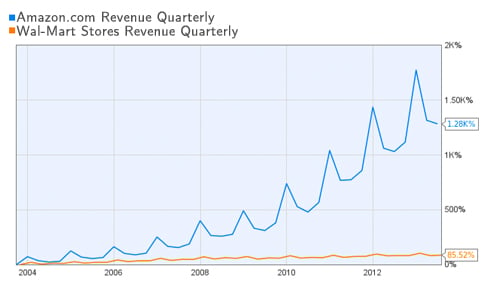 If Amazon continues to grow at an average annual rate of 32%, as it has been, then in five years the company would reach $207 billion in revenue. In seven years it would reach $306 billion. And by 2021 Amazon would be closing $475 billion in sales, surpassing Wal-Mart.

There's every reason to believe this is feasible. Although Amazon has only 6% of the e-commerce market currently, the company is growing at a speed that surpasses most of its e-commerce competitors.

The e-commerce industry has low barriers to entry. All a company needs is a website and the ability to drive traffic to it. However, in reality very few can hope to compete with Amazon. According to Morningstar, Amazon already makes more money than the combined revenue of its nine closest competitors, excluding eBay. More importantly, Amazon is currently selling in only twelve countries including the U.S. and Canada. So there is tremendous opportunity for growth as Amazon expands its global reach.

Wal-Mart won't catch up
Amazon is more than just an online retailer. The company has been very successful diversifying into completely different industries. One example would be Amazon Web Services (AWS). Ben Schachter, an analyst at Macquarie Capital, estimates AWS will top $3.8 billion in revenue this year. He values the whole server farm at $19 billion. AWS is currently making low returns in the short term while it develops strong business relationships with the majority of IT companies. This strategy will pay off in the long term. To get started with AWS a developer receives 750 hours free usage. We will discuss Amazon's success with the Kindle and Amazon Prime Services in another article. Stay tuned!

Final Foolish thoughts
Once Amazon surpasses Wal-Mart is there any chance that they and other competitors can catch up? Wal-Mart was late to take advantage of e-commerce. They've been trying to get inroads for the past 10 years without much success. In 2012 Wal-Mart sold only 2% of its total volume online, a mere $7.7 billion. They're building new warehouses for Web orders, but it may be too little too late. It's too early to be sure but comparing Wal-Mart's margins with Amazon's it doesn't look good. Wal-Mart has a huge workforce to maintain as well as all their brick and mortar retail outlets. And how many existing retail customers will start shopping on their Website? This cannibalism is inevitable.

Auctions king eBay (NASDAQ:EBAY) does remain a formidable competitor in the e-commerce arena. First, eBay is present in more countries. The company also has a 19.5% stake in Latin American e-commerce site Mercadolibre. Moreover, the company benefits from networking effects of payment processing platform Paypal (40% of total revenue), which processes 77% of eBay's global sales volume. But although they do have a much wider reach globally, its year-to-year growth is still well below Amazon's.

I believe most shoppers prefer discount stores rather than the uncertainty of an auction. eBay isn't worried however as the market is large enough to accommodate two giants. And auctions will always fill a need on the Internet.

With all this being said, there is no reason why Amazon can't reach 19% of the e-commerce market share by 2021. Their track-record of growth in their main business as well as their success in diversifying into other industries shows us that the risk vs. reward looks very promising.