This stock’s woeful underperformance may not reflect its actual value.

While many banks have seen their stock prices rise precipitously since the market bottomed out in March 2009, First Niagara Financial Group (NASDAQ: FNFG) has gotten crushed. Since March 2, 2009, First Niagara's lost 12% of its value, while the KBW Bank Index, which measures its entire industry, has returned 181%. But despite this dramatic slide, First Niagara's a much better business than its price would suggest.

You cannot always trust price to gauge value
As Warren Buffett once famously stated, "Price is what you pay. Value is what you get." Investors should be keenly aware that while the price of a stock is the most visible reflection of its worth, the book value reported on the balance sheet is the actual number that determines a company's value.

What does any of that have to do with a small bank in Buffalo? First Niagara has been on a bit of a buying spree lately, buying Great Lakes Bancorp in 2007 for $153 million, 57 branches of National City Corp (owned by PNC Financial Services) for $54 million in April 2009, and Harleysville National Corporation for $237 million in July of 2009. It also acquired half of HSBC's U.S. branches in July of 2011 for $1 billion.

All of those together represented almost $1.5 billion in spending, which has caused the assets of First Niagara to grow more than 4.5-fold since 2007. To finance all of that growth, the company took on new debt (which has quadrupled from its 2007 levels) -- and watered down its own share price by selling new chunks of stock as shown in the chart below:

By issuing new shares to fund its purchases, First Niagara increased the supply of its stock, even as demand for that stock stayed roughly the same. As a result, its share price sank. But while First Niagara still trails the market since its stock issuance in December of 2011, the gap from that point on is not nearly as great as its overall numbers might suggest: 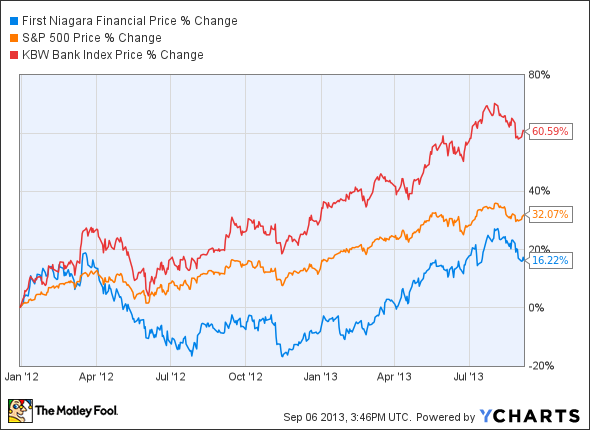 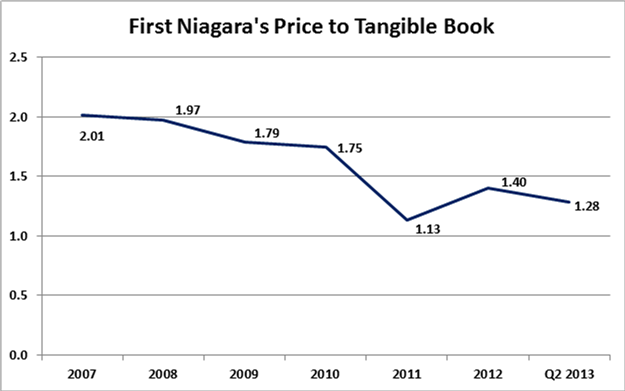 Considering First Niagara now has a price to tangible book value that trails peers Huntington Bancshares (HBAN 1.13%) and Zions Bancorp (ZION 1.69%) -- but with similar, or much better, returns on that average tangible equity in the last quarter -- First Niagara certainly warrants a closer look.

The past stock price performance won't always reflect its underlying value, and you shouldn't base your decisions on changes in share price alone. First Niagara's acquisitions have helped the bank greatly expand its footprint and reach in the Northeast and beyond. Don't get scared away just because its stock hasn't performed up to market trends -- do your own further research to see whether a strong value lurks behind those gloomy-looking returns.

Patrick Morris has no position in any stocks mentioned. The Motley Fool owns shares of Huntington Bancshares and PNC Financial Services. Try any of our Foolish newsletter services free for 30 days. We Fools may not all hold the same opinions, but we all believe that considering a diverse range of insights makes us better investors. The Motley Fool has a disclosure policy.