Yum! Brands has impressive growth plans across the world.

Investors have lost focus on just how profitable and valuable Yum! Brands' (YUM -1.47%) growth prospects truly are.  Despite the 2013 profitability setbacks and scandals in China, the company's most important market, Yum! Brands is poised for a long-term growth.  By 2015, the company hopes to earn 75% of its profit from its global operations, giving investors a unique opportunity to benefit.

China's short-term and long-term outlook
I believe that the company will recover from the chicken scandal and avian flu scare sooner rather than later. This belief is based on a similar recovery it saw in 2005/2006 following the discovery of a cancer-causing Sudan Red IV in KFC which came only a year after the 2004/2005 avian flu flare ups. After each incident, the company has been able to stem its losses in traffic and drive customers back to their stores sooner than its peers.

I believe the latest incidents (the chicken supply scandal in December 2012, and the avian flu scare in February 2013) will also pass and customers in China will resume their dining habits at the various Yum! Brands restaurants. Management is optimistic that a recovery will occur as early as the fourth quarter of 2013.  Analysts at Stifel have shown how the company has recovered from prior incidents in the past. 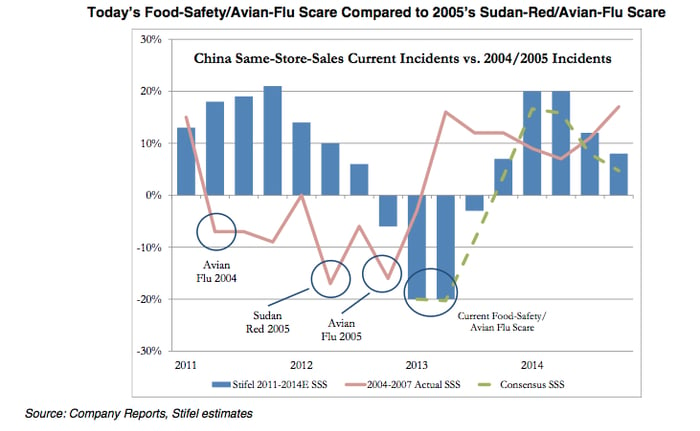 Major growth opportunities in India
Investors should be bullish on the long-term growth of India, which has the potential to become a billion dollar business in the next five to ten years. The company has plans to operate 1,000 locations in India by 2015. The Indian market consists of over one billion people and as the economy continues grow, incomes will rise and drive more urbanization that will help India become a hotspot for western restaurant concepts. India is now its own separate reporting division with business growth that could potentially rival China, as the country is a growing economy that is predicted to have the world's largest consuming class within a decade can only be seen as a huge positive.

Yum! Brands happens to be one of the first movers in India along with Starbucks (SBUX -1.10%), which is partnering 50/50 with Tata Global Beverages, the world's second largest manufacturer and distributor of tea and coffee. Together, the two giants operate 15 locations in Mumbai and Delhi known as "Starbucks A Tata Alliance" with plans to have 50 outlets in hospitals, educational institutions and corporate campuses by the end of 2013. Starbucks is also expected to roll out operations in untapped cities such as Bangalore and Chennai in the years to come.

Competition is fierce
McDonald's (MCD 0.69%) is also aggressively expanding in China, and according to a Bloomberg article expects to hire 75,000 workers to supplement the 90,000 individuals that are already employed. McDonald's is planning to open 300 new stores in the country, bringing its total to 2,000. The company hopes that its expansion plans will gain market share as it is currently losing the battle to Yum! Brands in the most populated country in the world. In 2011, McDonald's had a 15.6% share of the fast food industry, as compared to Yum! Brands' much larger 39%.

The battle over who will control China will heat up over the next few years. McDonald's holds the advantage of being the much larger company with over $2 billion in cash and can force a pricing war to gain market share, resulting in Yum! Brands lowering its prices and margins.

I believe that Yum! Brands' market-leading position will help the company deliver large profits for years to come. The competition might be heating up, but the fast food market is certainly large enough for all major competitors to benefit from.

First mover in Africa
Yum! Brands is also building a network in Africa that hasn't received as much attention from investors as it should. In South Africa, the company operates over 700 units and holds a larger company-owned presence in the remainder of the continent where stores are primarily franchised. KFC has been a major success thus far in Africa with virtually no competition from western or local concepts in many of the areas outside of South Africa. The company's sales performance and unit economics have been strong, letting it benefit from the competitive advantage of being an early mover in the region.

Domestic business continues to improve also
The company began a major rebound in the U.S in 2012, driven by a turnaround of its Taco Bell business after a false lawsuit over its ground beef in 2011 led to almost a year of negative comps. The company introduced the highly successful Doritos Locos Tacos through a partnership with Frito-Lay. Earlier this year, Taco Bell launched the widely anticipated (and tasty) Cool Ranch flavor of Doritos Locos Tacos, yielding another major success. Management has noted that they are committed to rolling out new flavors of Doritos Locos Tacos and utilize the Frito-Lay partnership to create new menu items that combine flavors and products from the two companies.

I believe that new product innovation can continue to drive solid same-store sales performance. The company's heavily franchised U.S strategy can allow it to take on additional leverage to create further shareholder value.

Market is big enough for everyone
Investors that aren't fully convinced of a Yum! Brands Chinese recovery should consider one of the company's largest competitors, Domino's Pizza (DPZ -0.56%) as it has been benefiting from the same international and domestic growth story.

Domestically, the company has seen strong traffic growth driven by the continued success of the Handmade Pan Pizza and an ongoing expansion of digital and mobile apps that are available for 95% of all smart-phones sold in the U.S.

Domino's Pizza doesn't have as large of a presence in China, but management noted in the most recent conference call that given the size of the opportunity, it is an area of focus though it is currently not a big driver of revenue.

The pizza chain did show an impressive growth in the international market, however, delivering same-store sales growth of 5.8% while opening 116 new stores during the most recent quarter.

Conclusion
I believe that it is not too late for investors to purchase one of the world's best global growth companies at an attractive valuation. Yum! Brands has suffered recently from perceived safety issues in China. Analysts seem to be mixed on the future performance of the stock, with Street best price target of $105 coming from Stifel with a buy rating while Credit Suisse has a $77 target and an outperform rating.

Jayson Derrick has no position in any stocks mentioned. The Motley Fool recommends Starbucks. The Motley Fool owns shares of Starbucks. Try any of our Foolish newsletter services free for 30 days. We Fools may not all hold the same opinions, but we all believe that considering a diverse range of insights makes us better investors. The Motley Fool has a disclosure policy. Is this post wrong? Click here. Think you can do better? Join us and write your own!

Why Allbirds Stock Was Plunging Today